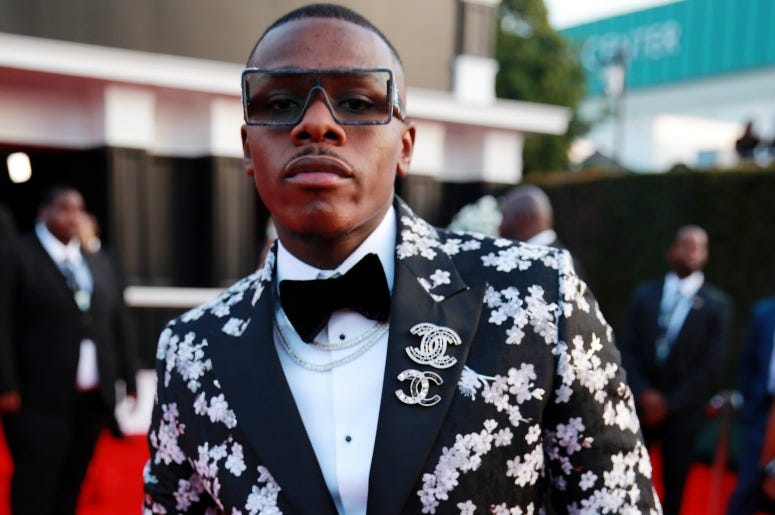 After announcing it’s release earlier in the week, DaBaby is back with his third album Blame It on Baby, just 7 months after his release of KIRK.

The project includes 6 features and 7 solo tracks. Feature or not, we’re here for it. With that said, we’re suckers for these epic collabs.

Here’s our ranking of the features starting with our faves, that make Blame It on Baby a must.

"NASTY" (featuring Ashanti & Megan Thee Stallion)
Enough said, but we’ll elaborate. The melodic addition of Ashanti and in-your-face, or rather ear, way that Megan commands a track is something we never knew we needed. But now can’t live without. SONG ON REPEAT.

"PICK UP" (featuring Quavo)
DaBaby starts off the album with Quavo showing us he’s not here to play. Just the beat alone makes it a hit, mixed in with some Quavo, this one’s a chart-topper for sure.

"LIGHTSKIN S***" (featuring Future & jetsonmade)
DaBaby hits us with his rapid fire flow over a jetsonmade beat that makes us feel like we’re on an island adventure, accompanied by 808’s and claps. Adding in the feature from Future ties the song together to make it a guaranteed hit.

"ROCKSTAR" (featuring Roddy Ricch)
DaBaby and Roddy slow down the melody for us with this one, giving us something to sing to while still coming hard with the lyrics.

"JUMP" (featuring YoungBoy Never Broke Again)
The beat remains consistent but the back and forth flow between DaBaby and YoungBoy makes this track a stand out bop.

DROP (featuring A Boogie wit da Hoodie & London On Da Track)
London’s production brings on a different sound with this track. Allowing Baby and A Boogie to come with a melodic flow that fits perfectly over the wavy synth sound.

Blame It On Baby is now available everywhere.