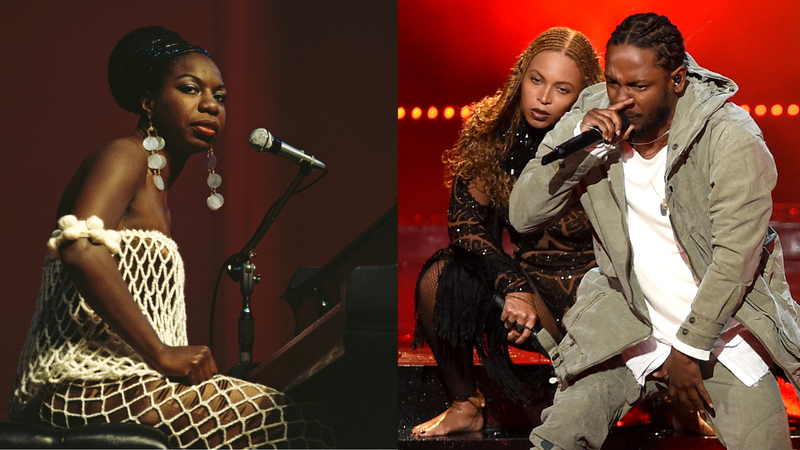 Black people have been using song to express their emotions and tell a story forever. Whether it was slaves keeping their sanity by singing negro spirituals or Jeezy celebrating our first Black/forever President Barack Obama, or artists like Billie Holiday becoming a literal target by speaking out against certain social justice issues, music is how we get through anything— every mountain high and every valley low.

When sitting down to compile this list, I thought of the late Paul Mooney's infamous phrase: "everybody wants to be a n**** until it's time to be a n****." We are the most studied, copied and undervalued race. A song that immediately came to mind as a way to lift us up is Solange's "F.U.B.U.." When discussing the song's meaning, the Houston native expressed, "[...]that song has resonated with so many people because it is almost an allowance to just let it out. I named it 'F.U.B.U.' because I wanted to empower, and I looked to people who have done that in their own ways."

She continued, "I thought of F.U.B.U. the brand, meaning 'For Us By Us,' and what kind of power it had and how normalized it became to wear that kind of symbolism every day. I remember reading stories on the product placement, and seeing LL Cool J wearing a F.U.B.U. hat in a national GAP advertisement. F.U.B.U. exhibited Blackness in any space, on a huge global level, and that is what I wanted to do with the song." The entire A Seat at the Table album flawlessly weaved in and out of detailing pain, joy and protection of Blackness and especially Black womanhood. That was a cultural reset.

Other classics that should be played to celebrate all of us are the Sounds of Blackness' "Optimistic," Beyoncé's "Brown Skin Girl, Nina Simone's "To Be Young, Gifted & Black," and James Brown's "Say It Loud; I’m Black And Proud." Not to mention, in 1900, James Weldon Johnson wrote "Lift Every Voice and Sing." Formally known as the Black National Anthem, the poem-turned-song details endurance, suffering and most of all, freedom.

In order to keep our history alive, we must talk about it. Though, it wasn't always received well. We thank the brave ones who came before us who fought for the freedom to speak on things affecting us. Billie Holiday got banned from performing "Strange Fruit." The 1939 cover centered around lynching in the Jim Crow South was labeled a protest song. However, that wasn't the first and wouldn't be the last. Nina Simone's "Mississippi Goddamn" is about the assassination of civil rights leader Medgar Evers and "﻿Why (The King of Love is Dead)" is about the assassination of Martin Luther King Jr..

There's also Marvin Gaye's What's Going On that explained the hardships we faced during the time of the Vietnam War. At the heights of police brutality, all that anger got released in Hip Hop with protest anthems like Public Enemy's "Fight The Power," and N.W.A.'s "F*** Tha Police." Michael Jackson also controversially sang about racism on his 1995 single, "They Don't Care About Us." Not only that, but modern artists also provide hope with Kendrick Lamar's "Alright" dropping during the 2015 Black Lives Matter movement. Then, the movement went mainstream when H.E.R.'s "I Can't Breathe" won Song of the Year at the 2021 GRAMMYs.

Sam Cooke's "A Change Is Gonna Come" empowered those during the civil rights movement. Beyoncé and Kendrick later teamed up on her 2016 single, "Freedom," empowering us during the attacks on us at the hands of police brutality.

Nina Simone once said it's an artist's duty to reflect the times, but it's our duty as the culture to make sure our stories don't die with us.