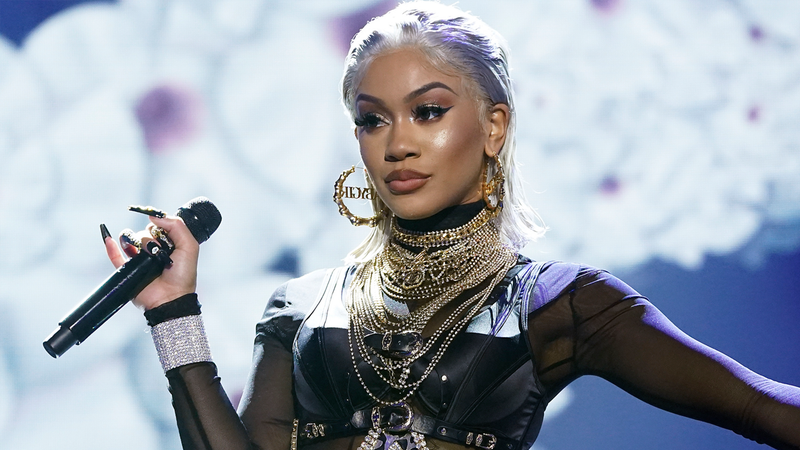 From the track, to the field, to the court, to the octagon, to growing 50 feet tall and stomping around the city, Saweetie is pretty much unstoppable in the music video for her new single “Fast (Motion),” and for that matter, just generally in life.

Yet another lead-up to the Bay Area rapper’s heavily anticipated debut album Pretty B**** Music. The new track follows Saweetie's recent collabs with Doja Cat on “Best Friend,” and the new version of Gwen Stefani’s “Slow Clap,” as well as the debut of her Pretty Summer Playlist, the first of what she says will be a yearly series. Staying in her genre-bending lane, Saweetie once again served up a catchy pop-infused rap bop that puts her various skills on display, so “Now you gotta listen while I pop my s***.” She said it, not us.

Directed by James Larese, the video shows Saweetie straight up slaying in various sports like track, football, basketball, she’s even seen “comin’ in fast” jumping out of a plane, then “hittin’ that gas” with some serious Tokyo Drift vibes in a Mielle Natural Hair Care sponsored car.

If you’re like us, by the 2 minute and 35 second mark, you’ll have already concluded that Saweetie is a legend, and then you’ll hear the Ciara “Got Me Good” sample and you’re body will spontaneously combust, or just start twerking (in faster motion), either way, “we causing a commotion.”

So do yourself a favor and get on our level by checking out the music video below. Because honestly there’s really no point in trying to get on Saweetie’s, since she’s busy running the circumference of the earth. So just go ahead, scroll up and press play if you haven’t already.