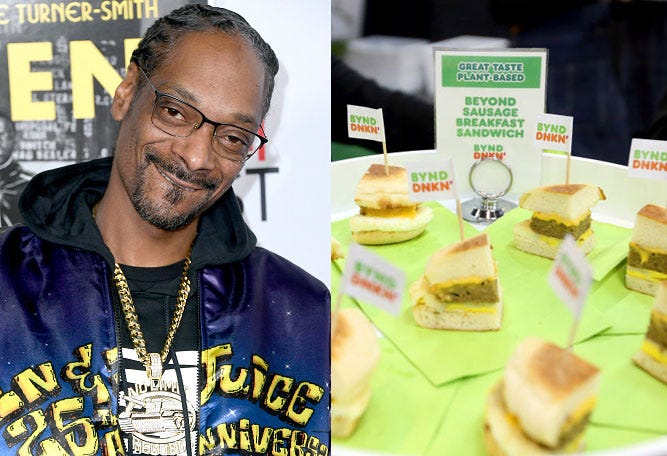 The “Beyond D-O-Double G sandwich” went public on Monday and marked the official “collab” between the chain and the rapper.

The unique sandwich consists of a “Beyond Sausage patty with egg and cheese nestled in between a sliced glazed donut.”

According to the press release, the sandwich has Snoop’s approval and features his favorite things including his "passion for plant-based protein and love of glazed donuts.”

The rapper promoted the sandwich on his Twitter writing, “Every dogg has his day, and now this dogg is getting his own donut sandwich.”

If you want to get your hands on the savory and sweet sandiwch-izzle, you have to act fast because it’s only available for a week starting January 13 and lasting through January 19 at participating locations.

The partnership between Dunkin’ and Snoop is far from over, however.

According to CNN, the duo is set to open a pop-up store later this month to sell tracksuits adorned with “Glazzzed for Days. Other clothing items include joggers, bomber jackets, sweatshirts with the word “Glazzzzy” along with the Dunkin’ and Beyond logos.

Per CNN, Beyond Meat menu-items are all the craze now and have been a hit for Dunkin’ according to CEO Dave Hoffmann who revealed that the Beyond Sausage Sandwich is now the second best-selling item in Dunkin's Manhattan stores.

In addition to meatless alternatives, Dunkin’ is also offering dairyless ones with its Oatmilk Latte.

The drink is set to debut in the spring, but some lucky Californians were able to give it a taste test as early as January 1, according to Thrillist.