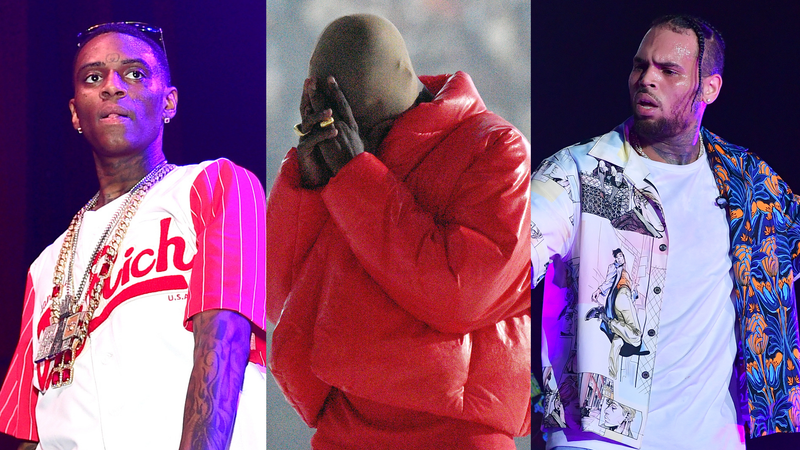 New week means new Kanye West dramz — so here it is. After Ye claimed that his long delayed album, DONDA, was released without his permission, both Soulja Boy and Chris Brown came for him about their verses being excluded from the final product.

Listen to your favorite music now on Audacy and check out Audacy’s exclusive Kanye West Radio station to listen to all your favorite Yeezy hits and more.

As we all now know the official version of “Remote Control” that dropped on
Sunday only features Young Thug and not a drop of Draco.

That very same day Soulja took to Twitter, alleging that Kanye removed his verse from the song, “Remote Control” and posted screenshots of his text convos that show Kanye reached out to plan the collab and praised Soulja’s verse, and at one point even invited Soulja to work on his upcoming Yeezy Gap campaign.

On Monday, Soulja leaked the version of “Remote Control” that includes his verse on Twitter.

And he didn’t stop there continuing to troll Ye with tweets, saying, “If he didn’t like the verse he should of said that don’t text me acting like u f*** wit it then secretly take it off. What kind of s*** is that I was working on my album too I don’t got time for this s***.” As well as countless hateful retweets and this…

I was the first rapper wit @KimKardashian not u 😉 @kanyewest 😂 pic.twitter.com/OrP2H2C20d

Chris Brown also took to social media to air out his frustrations with Kanye, which unlike Soulja wasn’t as abundant, however on par in when it comes to the less than loving vibe.

As reported by Revolt, multiple outlets stated that Chris posted and then deleted, “KANYE A WHOLE HOE” on his Instagram Story. And thanks to the all powerful internet and one curious fan, it appears he in fact did.

What did Kanye do to Chris brown??💀 pic.twitter.com/usobemm58W