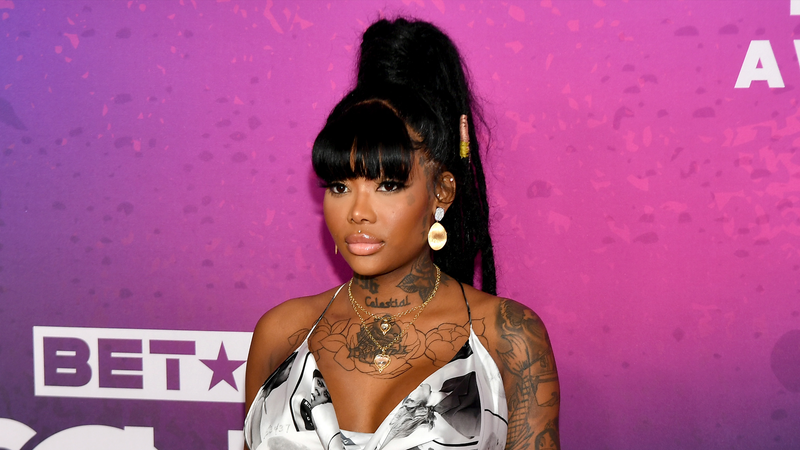 Clearly no commitment issues here. Summer Walker and her new boyfriend LVRD Pharaoh, are showing off their new, matching face tats and some PDA in a short and sweet video montage on Instagram.

Yup, that’s right we said matching face tats. As both got each other’s names permanently etched on the side of their faces. Summer’s tattoo, placed on the side of her eye, boasts Pharaoh’s real name — Larry, while his placed above his brow, says Summer.

Throughout the photos used in the post, which Summer captioned “🖤Bestfriend,” the lovebirds are cozied up and packing on the PDA in a few affectionate but (PG) poses.

Aside from the fact that tattooing your significant others name on you generally being taboo, the duo’s new ink, and particularly it’s placement, was received to some mixed emotions from fans.

While Summer’s ride or die supporters were thrilled to see her so happy, others took to the comments section to express their confusion, and they didn’t hold back.

While one person wrote, “Girl, you done lost your mind literally.” Someone else said, “Summer I thought we learned our lesson.” And another added, “I love you but this ain’t it sis. You haven’t even healed from the last relationship.”

Which uhhh isn’t completely false, since it wasn’t that long ago, like AT ALL, when her rocky romance and ongoing feud with her ex-boyfriend London On Da Track and his other baby mamas, unfolded all over on the internet.

Anyway, back to the face tats. Twitter also popped off with people’s opinions on the matter. And similarly while there are some nice supportive comments, there were more from people not here for any of it. So obviously we picked a few of the one’s we found particularly sassy.

Summer walker been putting random shit on her face tbh

Summer Walker is the friend that gives the advice but don’t take it.

Why did I wake up to the name “Larry” being on Summer Walker’s face? pic.twitter.com/rfSDdhtMf6

Not Summer Walker giving us a whole album about how men aint shit and then going and doing some wreckless shit like tattoo a mans name on her forehead?? Girl who tf is LARRY?? Bye

As for how, LVRD Pharaoh entered into the mix and made things permanent with such a quickness, it’s rumored that he and Summer have known each other for years and even first dated before she was a famous singer.

The couple went public with the relationship in August during an IG Live. And by October, she was gushing over their relationship on the platform in a since deleted post that said — “So grateful to have this man,” Summer wrote. “He just increases my overall quality of life. I’ve never had someone put me and my child first before everything. To not have to lift a finger, for someone to truly be emotionally and spiritually intelligent and invested in me. It’s new and it’s nice.”

Well, in the spirit of love and also avoiding painful tattoo removal, we're wishing nothing but the best for these two.