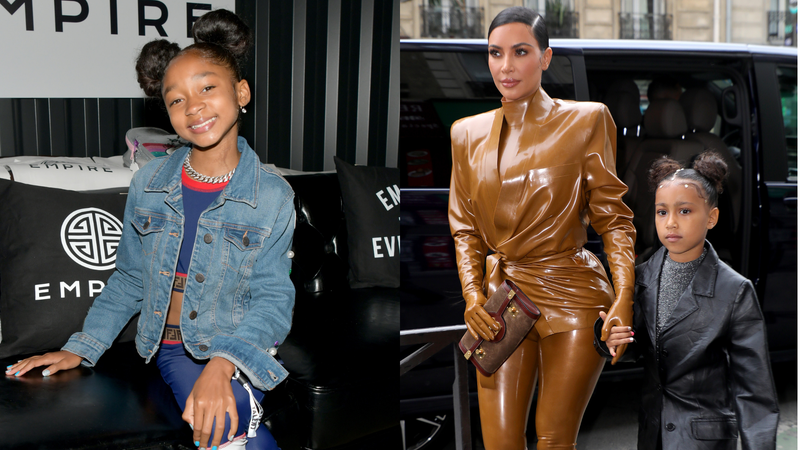 Alaya High, better known as That Girl Lay Lay is setting the record straight. The 14-year-old rapper made headlines recently when she aired out her frustrations with Kim Kardashian about a dancing video featuring North West.

Taking to Instagram, Lay Lay wrote, "@kimkardashian texted me to take down the new TikTok video with North in it. I don’t know why... They invited ME to their house. This industry SUCKS! I asked what did I do wrong and they didn’t answer me. So confused on what this industry is… just trying to make good positive music."

Kardashian's team claimed that the video was recorded without permission from North's parents and was later used in a professional capacity. Tracy Romulus, close friend of Kardashian, wrote, "Lay Lay was invited over one YEAR ago for a private child’s playdate [...] North is an 8-year-old child who is not on social media, and it is well within her parent’s rights to say how and when their daughter’s image can be used for promotional purposes just like it is well within Lay Lay’s parent’s right to say yes or no when it comes to their child’s image."

A post shared by That Girl Lay Lay (@thatgirllaylay)

Lay Lay spoke exclusively with Audacy's own Big Tigger to clear the air. To start things off, Lay Lay reiterated that her Instagram page is ran by her parents, specifically her father, Acie. The rapper expressed that she visited the Kardashian home twice. While there, she recorded videos with North to Lay Lay's songs and Kardashian's team approved the videos for social media.

"The second time, we did the same thing that I did the first time, which we made TikToks and videos, which they said that I was secretly recording— which is not true," she stated. Lay Lay continued, "I was around the nanny and all of the security in the house and there's cameras everywhere and we were outside [...] Everybody knew I was recording. They all know."

She also revealed that she went to the Kardashian home, specifically to "make TikToks with North." Furthermore, "we didn't think anything of it for them to say that I couldn't post the dancing video because I already posted two [other] videos. We didn't think it would be a problem this time." However, she was asked to take the video down and was upset.

Her "overprotective" father was the one who posted about her frustration, and Lay Lay begged him to take it down. He wasn't immediately willing to accommodate her request, but he did come around. "Before he could even get it down, it went viral," she stated. Her father chimed in and expressed that Lay Lay was "used."

Acie revealed that he and Kardashian spoke on a personal level several times, but when Romulus stepped in recently, "she was really, really nasty and that's what really triggered me [...] she was real insensitive." Her father also mentioned that this is Lay Lay's first instance of "industry friends" and spoke on how he tries to ensure she maintains a positive spirit while being homeschooled.

Check out the full interview with the Big Tigger Morning Show above.