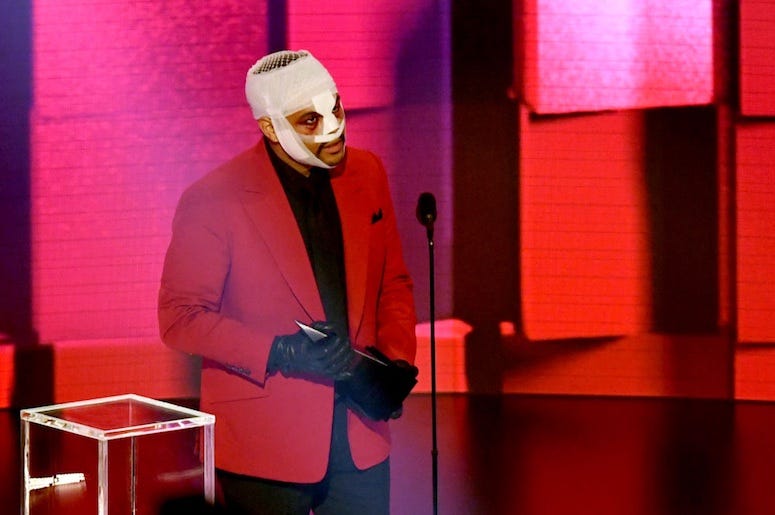 Excitement about The Weeknd’s performance at Super Bowl LV continues to grow, but there’s a pressing question that remains to be answered. Will he be bandaged during the performance?

Ever since the release of his album After Hours, The Weeknd has continued to escalate his bloodied and bandaged look whenever he makes a public appearance. In fact, the internet was quite confused when he showed up to the VMAs with a bloody nose and bruises all around his face.

Since that time his appearance has progressed to a full-fledged bandaged face at his performance at the American Music Awards.

Any concerns about The Weeknd’s physical appearance can be put to rest as he’s assured fans it’s all a part of his After Hours character. The “Blinding Lights” singer recently spoke with Variety and explained the story behind the bandages.

“This character is having a really bad night, and you can come with own interpretation of what it is,” he previously told the outlet. The Weeknd, real name Abel Tesfaye, elaborated on the meaning of the character.

The significance of the entire head bandages is reflecting on the absurd culture of Hollywood celebrity and people manipulating themselves for superficial reasons to please and be validated,” he said.

When asked if there was anything to take from him intentionally making his face more unattractive and battered while promoting the biggest album of his career, The Weekend said, “I suppose you could take that being attractive isn’t important to me but a compelling narrative is.”

Plus, it seems as if his character's bad night out is getting worse and worse. “It’s all a progression and we watch The Character’s storyline hit heightened levels of danger and absurdity as his tale goes on,” he said.

WATCH MORE: Demystifying The Weeknd: Here's what to know about the hitmaker