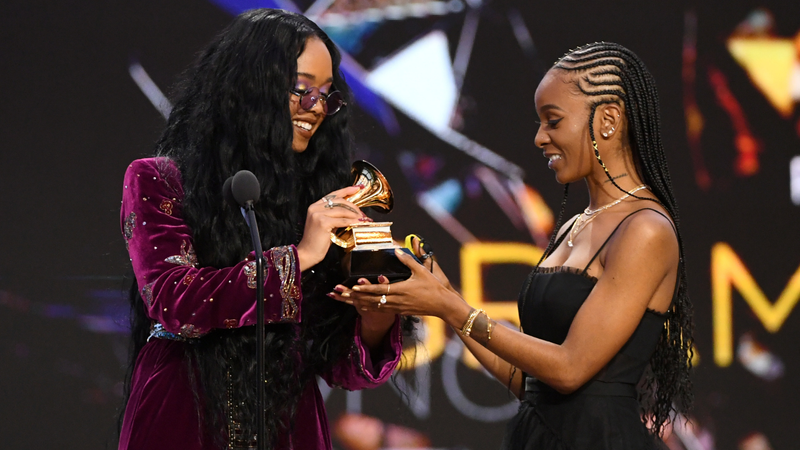 A song shedding light on the tragic murders of innocent Black lives won Song of the Year and what a deserving win it was. H.E.R.’s “I Can’t Breathe” took home the award marking her fourth overall career win.

The singer was accompanied on stage by her co writer, Tiara Thomas, nearly in tears. She began by saying, “I’ve never been so proud to be an artist.” Admitted the two wrote the song via FaceTime, H.E.R. “couldn’t imagine that [her] pain and fear would turn into impact and it would possibly turn into change.” She thanked God for allowing her to be “a vessel for change.” Amid thanking her team, she reflected. “Remember we are the change we wish to see and you know that fight that we had in us the summer of 2020, keep that same energy,” she expressed.

The song title, “I can’t breathe” were the last words said by Eric Garner, George Floyd and others who lost their lives at the hands of police brutality. When asked about the lyrics, H.E.R. revealed “these lyrics were kind of easy to write because it came from a conversation of what’s happening right now, what’s been happening, and the change that we need to see. I think music is powerful when it comes to change and when it comes to healing and that’s why I wrote this song, to make a mark in history. And I hope this song does that.” It reminded us of Nina Simone’s sentiment from the ‘60s about “an artist’s duty,” a sentiment that still rings true today. “An artist's duty, as far as I'm concerned, is to reflect the times [...] and at this crucial time in our lives, when everything is so desperate, when everyday is a matter of survival, I don’t think you can help but be involved,” she stated.

One line that particularly stands out is “That kind of uncomfortable conversation is too hard for your trust-fund pockets to swallow/ To swallow the strange fruit hanging from my family tree,” alluding to Billie Holiday’s legendary song from 1939, “Strange Fruit,” a vivid comparison about the lynching of Black people. In the post-show press room, H.E.R. expressed how she believes this song will be a “stamp in time,” and how it will serve as a reminder about the murders of George Floyd, Breonna Taylor, and countless others “who we are still fighting for.” She continued, “I hope that it’ll contribute to the movement and that it’ll continue the fight and it will continue to give people hope because I think that’s what music does.”

While the accolades and recognition are great and well-deserved, the 23-year-old expressed that “it’s so much more bigger than us and it’s so much bigger than now,” and she couldn’t be more right. Regardless of what your contribution is to society in a professional sense, you can always support those courageously fight for justice and the artists that do reflect the times. More often than not, those who do fight for oppressed and marginalized people wind up with as targets. Just see Judas and the Black Messiah or The United States vs. Billie Holiday— recent films about real people who were targeted for speaking out against racism and injustice. H.E.R. winning this GRAMMY is merely a stepping stone in the larger fight, but note that Black lives have always, and will always matter.

H.E.R (@HERMusicx) says she hopes her #Grammy Award for "I Can't Breathe" "contributes to the movement and that it will continue the fight."