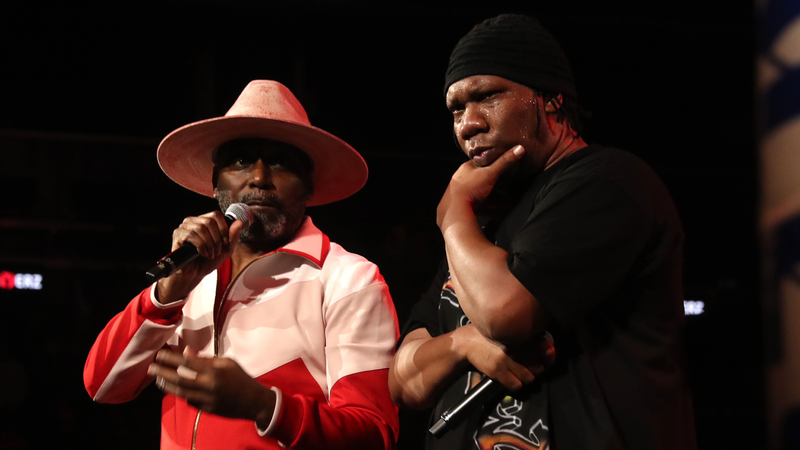 Since the start of the pandemic, the Timbaland and Swizz Beatz backed Verzuz has provided proper entertainment while creating a platform for Hip Hop. And despite now being able to go outside and be around people (safely), the series remains and has since evolved from at home battles with sketchy wifi, to epic in-person showdowns.

Following the Hip Hop heavyweight battle between Fat Joe and Ja Rule that took place the first week of September, on Sunday 10/17, it was time for us all to dust off our Kangol hats and over sized gold rope chains to see two of the most revered rap pioneers — KRS-One and Big Daddy Kane — step into the proverbial ring at Barclays Center in Brooklyn.

As we’ve now come to expect, the evening featured a few special guests, including DJ Scratch who rocked the turntables for Kane, while Kid Capri backed KRS on the 1s and 2s. The night also saw appearances from Roxanne Shanté, Eric B, Mad Lion, Das EFX, and more. However, many noticed one legend in particular was MIA… Rakim, and it really had them feeling some type of way.

Tbh, we can’t say we’re that surprised since the idea of a Verzuz battle featuring BDK and Rakim was floated and quickly rejected by Kane just a few months earlier.

During an interview with HipHopDX at a Juneteenth celebration in Pittsburgh, Big Daddy Kane was asked if he’d ever consider doing a Verzuz with Rakim. Well, the answer wasn’t no, but it definitely wasn’t yes — with that said, he did reveal the MC he’d prefer to hop in the ring with.

Ladies and gents, that’s what we call — manifestation.

Anyway… despite BDK and KRS putting on an incredible show that truly took us back to Hip Hop’s golden era, members of the Verzuz universe have spoke (on Twitter of course) sharing their thoughts about the lack of Rakim. While some pointed out his general absence, others shared their thoughts about about how he should have been the one to face Kane on stage.

Per usual, we’ve done the scrolling so you don’t have to. Below are what just a few had to say, because we don’t have all day.

One Twitter user claimed, “Everybody waiting for Rakim to come out…”, while one more stated, “Whoever brings out RAKIM automatically wins IDGAF.”

As another noted, “We all know it should have been Big Daddy Kane Verzuz Rakim.”

Check out a few highlights from the night below.