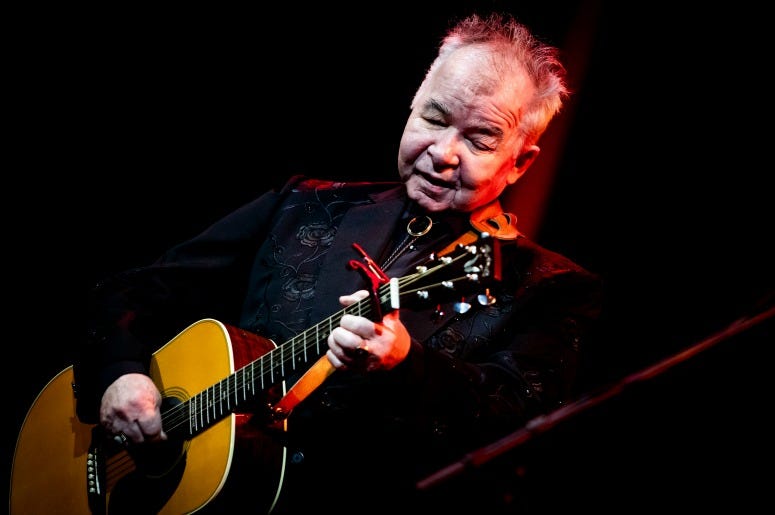 Songwriting is an art form many undertake, but few are able to master. As a challenge that engulfs many, John Prine made it seem effortless.

Whether it was an opportunity to comment on what’s going on in the world, share a story, or give his views on life, he was one of the best and did so with a style that left its imprint on many.

Prine passed away at the age of 73 after battling COVID-19 symptoms. As the music world mourns his death, it also serves as a time to highlight his genius. While several artists are sharing tributes and stories about their relationship with Prine, many are highlighting the songs that shaped them as musicians.

These are the top seven songs written by John Prine.

Coming off of Prine’s 1971 self-titled debut album, “Angel From Montgomery” is Prine’s best-known song. Popularized by Bonnie Raitt, the song became a country standard and has been covered by many.

Another track off his debut album, Prine wrote the song for his father as an ode to the small mining town in Western Kentucky where his parents met. As with “Angel From Montgomery,” the song became a country standard with the likes of The Everly Brothers, Johnny Cash, John Denver, and John Fogerty recording covers.

When I Get To Heaven

Fittingly enough, “When I Get To Heaven” served as the final track on Prine’s final album. “When I get to heaven, I’m gonna shake God’s hand/Thank him for more blessings than one man can stand,” Prine sings on the opening lyrics. If this song was Prine’s musical parting message, it’s just as beautiful as anything he’s ever written.

In Spite Of Ourselves

This was the only song on the album of the same name Prine wrote and it is one of his finest works. A quintessential example of his lyricism, the song takes the serious topic of love in a long-term relationship with Prine’s humor at the forefront describing the situation. Prine sang this song as a duet with Iris DeMent.

The song off Prine’s 1991 GRAMMY-winning album The Missing Years sees Prine using a personal experience and relating it to something everyone goes through. A relationship falling apart. Once again, Prine deals with the difficulties life presents and sings about them in a beautiful manner.

That’s The Way The World Goes Round

Coming off of his 1978 album Bruised Orange, the song stemmed from the frustration over the cynicism Prine saw in society and himself. As he does so well, Prine tackles a complex topic while simultaneously bringing levity to it. Miranda Lambert recorded a cover of “That’s The Way The World Goes Round” on her album Revolution, and the song continues to be a staple of her live performances.

Coming off of his final album, The Tree of Forgiveness, Prine comes to terms mortality through the lens of humor. Dedicating an entire verse to Pluto’s loss of status as a planet, Prine humorously sing, “Once a might planet there/Now just an ordinary star/Hanging out in Hollywood/In some old funky sushi bar.”