When Hootie & The Blowfish decided to tour and celebrate the 25th anniversary of their debut Cracked Rear View, they always knew there would be another album. The band last released an LP in 2005, but this week they return with Imperfect Circle, a snapshot of experience and skills they’ve picked up along the way, and most of all of a friendship brought back into focus through this year’s experiences.

“When we decided to tour we knew that we wanted to make another record,” explains frontman Darius Rucker, who has spent the last decade carving his own path in Country music, now back with the band from South Carolina. “For us, we’re song guys. Putting the songs together was the most important thing to us, and finding songs and writing songs and doing all that. We knew when we were making this record, no matter what we try to do we’re gonna sound like us no matter what.”

Rucker is right, with Imperfect Circle being undeniably Hootie, but filtered through the sensibilities he has picked up along the way and the standpoint of a band seemingly so happy to be here. There’s always been a joy to the group’s music, but here it’s a well-earned happiness only age and understanding can afford.

“Like old school, we just went in and got the songs and said lets do this,” Darius continues, seated with his fellow Blowfish around him. “We did it our own way. We didn’t want to wait till our record was done before we toured. So we just went ahead and toured and said the record will be done when we’re done.”

That tour delighted fans across the country, serving as a subtle reminder of what a staple Hootie had become to anyone coming of age in the 1990s. It’s a reflex to bellow “Let Her Cry” as you hear that drumfill lead you in, or to launch into “Only Wanna Be with You” at the simple sound of a guitar strum. It isn’t an accident that Cracked Rear View is one of the top selling albums of all time, it’s just the work of some so-called “song guys.”

Now with those emotions sparked and the pump primed, Hootie & The Blowfish are ready with the album they wanted their way. “’Imperfect Circle’ is just a great way to describe our journey, from being 18 and 19 year old kids, doing all the stuff we’ve done and going through all the stuff we’ve been through, to now being 53 and 54 and to have kids that are grown and stuff like that,” Rucker explains. “Definitely nothing was perfect about our lives, and so I think it’s a great name for the record. Describes us perfectly.” 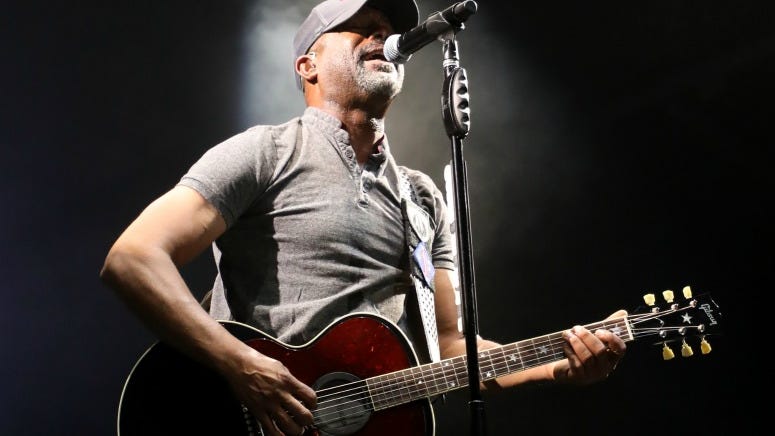 On Tour: Hootie & The Blowfish and Barenaked Ladies Are a Perfect Summer Pair

The album features Hootie being Hootie and hopeful, with a few interesting contributions from a few famous friends. Chris Stapleton gets a co-writing credit on the song “Hold On,” and Lucie Silvas appears on the song “Wildfire Love.” Silvas is the wife of fellow Nashville friend John Osborne of Brothers Osborne. The song with Silvas was co-written by longtime friend Ed Sheeran.

Sheeran and Rucker first became friends when Darius' daughter wanted to see him on tour with Taylor Swift. After linking up at several shows, the two began writing together. “He’s an amazing songwriter, a great guy,” Darius says of Sheeran. “He just has a sense of melody like no one I’ve ever written with before.”

According to Sheeran, Darius Rucker was actually the first big star he met when coming to play shows in the states, Rucker however, wasn’t quite as big in the UK. “He was like, ‘I had to google you,’” Rucker laughs.

For much more from Hootie & The Blowfish, including when they first heard themselves on the radio, check out the full exclusive interview above.