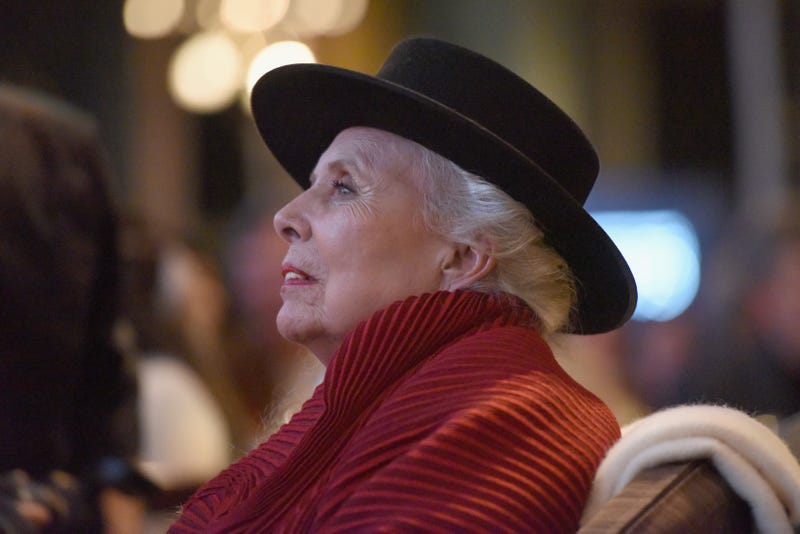 Back in 2015, one of the most prolific architects of the Laurel Canyon music scene, Joni Mitchell, faced a major health scare after suffering from a brain aneurysm. The singer-songwriter was hospitalized for months that year but kept her health condition under wraps.

Now in 2020, Mitchell is opening up about her health in a candidly rare interview for the Guardian, with long-time friend, writer, and famed director, Cameron Crowe.

While sitting down with Crowe, Joni shares that she had in fact lost her ability to speak while she was working towards recovery in the hospital. However, the singer says, “I couldn’t talk. Polio didn’t grab me like that, but the aneurysm took away a lot more, really,” she explains. Joni shares that the health complications also took away her ability to walk, and now five years later, after facing some of the scariest moments, Mitchell still faces difficulties with walking. With spunk she adds, “But I mean, I’m a fighter. I’ve got Irish blood!”

Throughout these past five years, the singer with a massive and beloved body of work has focused much of her time “inching” her way back to health. This has meant putting her health at the forefront and shifting the focus away from music and writing. She tells Crowe, “I haven’t been writing recently. I haven’t been playing my guitar or the piano or anything.”

While her main focus is her health, Mitchell is still full of the wistful and strong Laurel Canyon spirit that has touched so many. She tells Crowe, “You know what? I came back from polio, so here I am again, and struggling back.”

With new music on the back-burner, it doesn’t mean that Mitchell won’t be giving us fantastic new listening material. On October 30 Joni Mitchell Archives Vol. 1: The Early Years (1963-1967) is due out and will reveal incredible archival recordings of some of the folk songstress’s earliest work.

The new album features a demo recording of Joni’s “firstborn” song, “Day After Day” which she recorded for Elektra Records in the summer of 1965. Plus the archival experience features an early recording of “House of the Rising Sun.”

The Early Years will give listeners the chance to delve deep into six hours of unheard recordings of Mitchell, from home studio sessions to birthday recordings for her mother, to work tapes, to live recordings. The record also boasts 29 previously unreleased songs.

In a statement about the upcoming album, the singer whose sound exudes the essence of 1960s Los Angeles shared, “they only exist in these recordings. For so long I rebelled against the term, ‘I was never a folk-singer.’ I would get pissed off if they put that label on me. I didn’t think it was a good description of what I was. And then I listened and…it was beautiful. It made me forgive my beginnings. And I had this realization… I was a folk singer!”