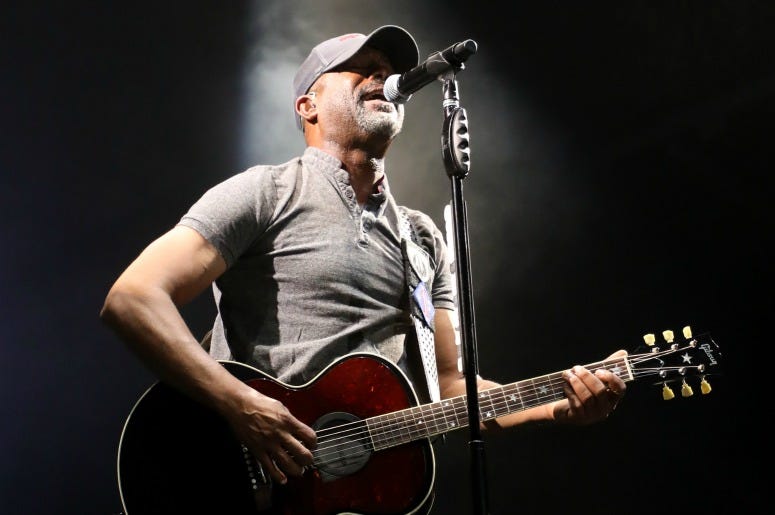 They were on a break.

As 90s nostalgia continues to surround us in warm retro relief, it makes all the sense that Hootie & The Blowfish have picked now to return. After a decade away, the mega-selling South Carolina outfit are back to celebrate the 25th anniversary of Cracked Rear View, and for at least an evening, help you fade back into the forgiving glow of familiar favorites.

In May, the band embarked on the Group Therapy Tour alongside fellow mold-breakers, the Barenaked Ladies. Together, they make for a charming and comfortable night. Humbled by time but backed by hits and millions of records sold, these two 90s powerhouses make a perfect pair.

We had a chance to check out Hootie & The Blowfish and Barenaked Ladies at a recent stop on the Group Therapy Tour. Here’s what we saw. 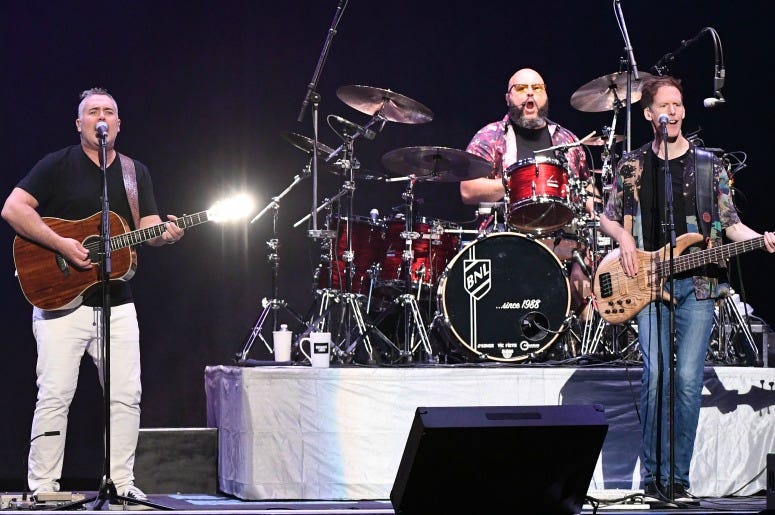 “Many of you are extremely value conscious” Barenaked Ladies frontman Ed Robertson announces to the early arrivers, there in time to catch the very start of their set and some new additions to their catalog. “You paid for the whole show, you’re gonna see the whole show.”

Dressed in vacation wear, the band embraces their role as opener, stoking the crowd with comedy and a fistful of hits. “You might recognize this next song cause we played it at the Peach Pit After Dark on Beverly Hills 90210,” he notes, before sliding into “It’s All Been Done.”

If you’ve lost track of BNL over the years, you might be surprised to learn that Steven Page is no longer with the group. Page and his booming voice departed the band a decade ago so that he could follow his own solo aspirations. He still is, releasing a new album last year and currently on his own tour of the US.

Robertson picks up the extra workload these days, managing to stretch his voice into the places you’re used to hearing Page. It works. Robertson is effortless with the double shift, and still manages to MC the set like a seasoned host.

After asking the crowd for some help singing along, he quickly sneaks in a caveat before starting the song. “Anyone who is not singing along in the choruses is a racist,” Robertson remarks plainly, as the crowd laughs.

Barenaked Ladies remain the nerds that made it. From “Chinese chicken” raps to The Big Bang Theory theme song, the band still packs fun into the oddest spaces. Come for “The Old Apartment” and “One Week”, but be sure to stay for the “Shallow” - “Old Town Road” - “Sicko Mode” medley you didn’t know you needed. 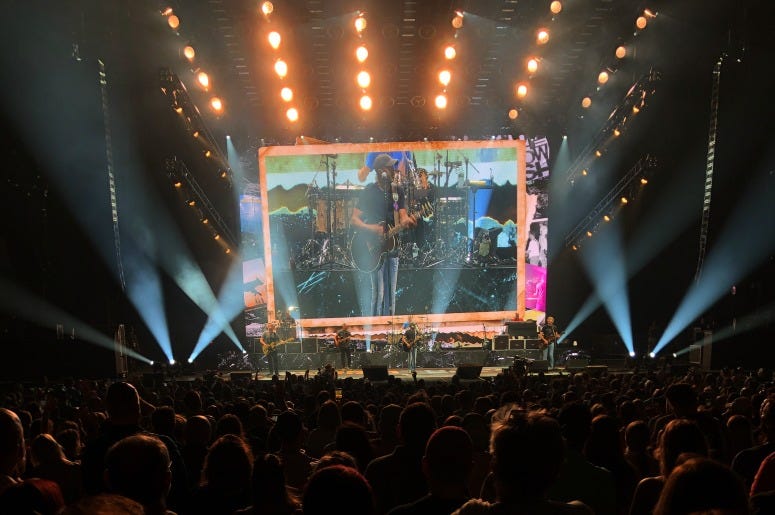 Samuel L. Jackson’s voice rings out in a return to 1994, before Hootie & The Blowfish is announced.

Bursting onto the stage with the lead-off song from Cracked Rear View, it’s immediately clear how things will unfold. This is the work of a Blowfish.

Darius Rucker, back from his own successful journey through Country music, is all loose and smiling as he makes his way from end to end. This reunion has the appeal of something far smaller than a cross-country amphitheater engagement. Even in its most orchestrated moments, there’s an “old friends in the garage” aura to the evening that’s infectious.

With more grey in the beard and a crowd filled with large-font iPhones, Rucker shares stories at a casual pace, reminiscing about the time they were living in a doctor’s office and the Zeppelin tribute they were asked to be a part of.
Never too serious, the songs are able to stand as the vital and vibrant tunes they are.

History sometimes forgets Hootie, but it can’t be understated just how popular they were. Cracked Rear View remains one of the top-selling albums of all time, and their success launched a thousand like-minded bands. Their strength has always been storytelling, and it’s the difference between being nostalgic and timeless.

Like the Ladies before them, the Blowfish also have their own arsenal of covers.
From the aforementioned Led Zeppelin song “Hey Hey What Can I Do”, to Rucker’s hit take on “Wagon Wheel”, to a surprising version of R.E.M.’s “Losing My Religion.”

Even as the career of Rucker has traveled a different path, the band plays like they’re all so excited to be here. Darius strutting across the stage in his cowboy boots, as guitarist Mark Bryan shreds barefoot, they’ve been different places but it is clear Hootie always feels like home.

Cracked Rear View was released in July of 1994. The band is planning to release a sixth studio album in 2019. You can find the full list of upcoming dates for the Group Therapy Tour here.