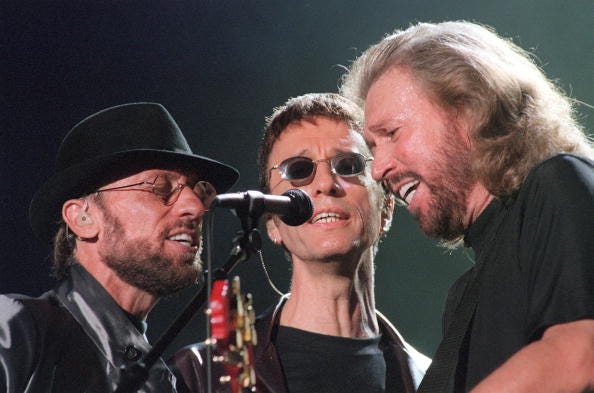 Audiences will soon be getting a bout of Night Fever.

Paramount Pictures is currently working on a biopic of ‘70s disco supergroup, the Bee Gees, according to Deadline.

Throwback to one of the most iconic #BeeGees outfits! Are you and your friends going as the Brothers Gibb for #Halloween?

The project is being spearheaded by Graham King, who produced the Oscar-winning Queen biopic, Bohemian Rhapsody.

King and Paramount purchased the rights to the Bee Gees’ story so the film will be able to include the group’s chart-topping hits like “Staying Alive,” “Night Fever,” “How Deep Is Your Love,” “Jive Talkin’” and “More Than a Woman.”

While the project has yet to find a writer to pen the script, Steven Spielberg will also be involved in some capacity with bringing the story to life, reported The Hollywood Reporter.

The Bee Gees were formed in 1958 by brothers Barry, Robin and Maurice Gibb. They recorded 14 studio albums and had several hits before attaining global success with the soundtrack to the 1977 film Saturday Night Fever.

The group has sold over 220 million records, won 8 GRAMMY Awards and were inducted into the Rock and Roll Hall of Fame in 1997.

Barry Gibb, 73, is the only surviving member of the band. Maurice passed away in 2003 at the age of 53 from complications of a twisted intestine, while Maurice died of colorectal cancer in 2012 at the age of 62.

While casting details have not been announced, after Rami Malek’s Oscar-winning turn as Queen frontman Freddie Mercury, the roles are sure to be highly sought after by many actors in Hollywood.

Although the Bee Gees biopic doesn’t have a release date, ‘70s Halloween costumes may see a huge resurgence in the near future.