While fans are praising Angelina Jolie’s upcoming film about a deaf superhero, one of her former employees isn’t impressed.

Antoinette Abbamonte is accusing the actress of stealing her movie idea.

According to the DailyMailTV, Abbamonte was employed by the A-List actress for three years to teach two of the children sign language. 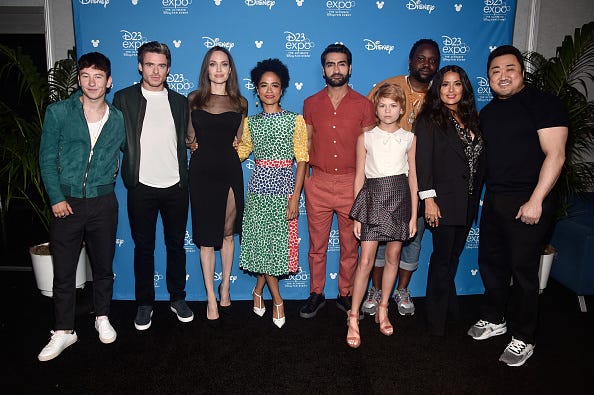 It was during that time that Abbamonte claims they talked about her film idea, which she believes influenced the upcoming “The Eternals,” premiering in November 2020.

“I thought that [Jolie] was stealing my ideas to paint herself like she is helping the world,” Abbamonte told the DailyMailTV.

The demand letter states: "It appears that you expressly solicited the idea of the Deaf Superhero from Antoinette and commercialized it together with Marvel Studios and Disney without compensating Antoinette."

The letter also details that Abbamonte would like to be credited and compensated for her idea.

Furthermore, DailyMailTV reports that they have seen emails backing up Abbamonte’s claim that she submitted the idea to Jolie in writing.

Abbamonte tells the publication that after hearing about the upcoming film, she confronted Jolie but to no avail.

“It's not that I want personal credit, I just hate how deaf people across the board are being treated,” she said in the interview.

Abbamonte, who also works as a film producer/actress and has been deaf since birth, told the publication that the actress treated her like a “second class citizen” by repeatedly asking if she could hear music or dance and by pressing to know more about her personal life and experiences.

“Again, I felt like they were picking part out of me to aide their upcoming film with deaf character,” she told the publication.

The film, currently being filmed in London, features Makkari, the first-ever deaf superhero, played by Lauren Ridloff from “The Walking Dead.”