Who better to play Princess Leia than the late Carrie Fisher’s daughter?

Billie Lourd stepped into her mother’s shoes for a scene in the final film of the “Star Wars” trilogy “The Rise of Skywalker.”

Fisher was best known as Princess Leia, a role that propelled her to stardom in 1977 and became a staple in the “Star Wars” franchise.

To finish telling Leia’s story, director J.J Abrams used a blend of former footage and asked Lourd to help in shooting a flashback scene of the character’s younger years.

Visual Effects Supervisor Patrick Tubach explained how momentous it was to have Fischer’s daughter stand in as a body double for the iconic character.

“Billie was playing her mother,” Tubach told Yahoo!. “It was a poignant thing, and something that nobody took lightly — that she was willing to stand in for her mom.” 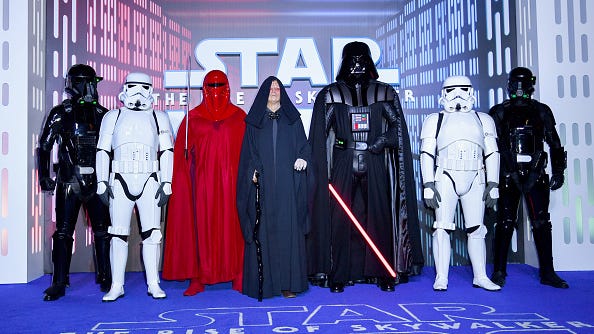 What to Expect From Rise of the Resistance, the Immersive New 'Star Wars' Ride

“It was an emotional thing for everybody to see her in that position,” Tubach recalled.

“It felt great for us, too. If you’re going to have someone play [Fisher’s] part, it’s great that it’s [Billie] because there are a lot of similarities between them that we were able to draw from. The real challenge was just making the Leia footage we had to work with fit in that scene.”

The editing team worked their magic to use previous footage of Fisher to digitally replace Lourd’s face.

Aside from being Fisher’s daughter, Lourd has paved a role for herself in the franchise.

Fisher passed away from a heart attack in 2016 at the age of 60. A handwritten note surfaced three years after her death and was found by her brother.

“Star Wars: The Rise of Skywalker” is currently in theaters.