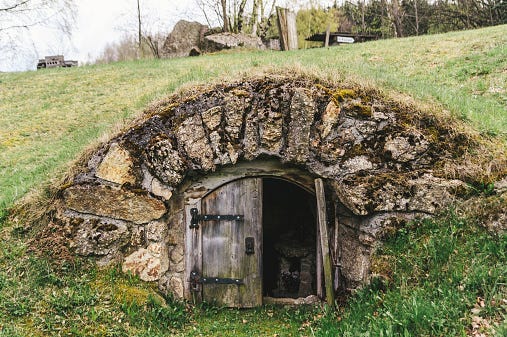 A couple in North Carolina is making their “Lord of the Rings” fantasies come true by building a Hobbit house that any wannabe Frodo Baggins can rent for the night on Airbnb, reported ABC affiliate WTVD.

HOBBIT HOME: This couple is building a one-of-a-kind "Lord of the Rings" Airbnb in North Carolina. The home is 90% underground https://t.co/cOm0rI51HW

Mike and Caroline Parrish are in the process of building the Shire-inspired 800-square-foot one-bedroom structure that features round doors and is 90% underground. Precious!

"What we want is to just have an area where people can come and bring their kids and just leave with an unforgettable experience," Parrish said.

Located in Woodfin, North Carolina, the unit will also include a bathroom and a kitchen to enjoy a lovely second breakfast.

While the blockbuster films were shot in New Zealand, Parrish is hoping to entice American LOTR geeks with a location that’s closer to home.

“We're coming up with what we hope will be the coolest hobbit home on the East Coast,” he added.

Although the dwelling is about two months away from being finished, the couple have not decided on what the nightly rates will be for their hobbit abode.

While it’s been 15 years since the “Lord of the Rings” trilogy was in theaters - and five years since “The Hobbit” trilogy - an Amazon Prime television series that will explore storylines prior to “The Fellowship of the Ring” is currently in the works.

Production is scheduled to begin in the next few months in New Zealand with “Game of Thrones” star Joseph Mawle (Benjen Stark) set play the lead villain.

While no premiere date has been announced, the streaming giant hopes to have it available for audiences at some point in 2021.