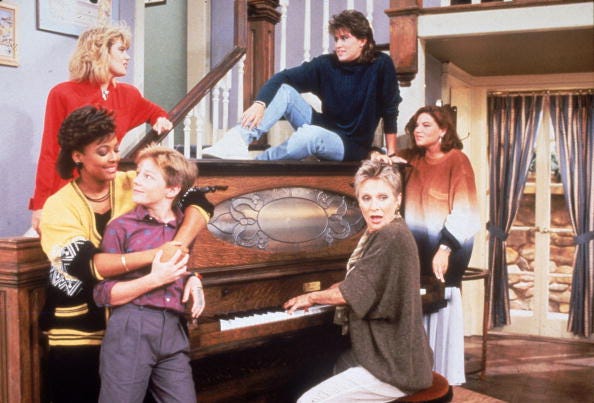 The stars of the ‘80s sitcom are coming back together to star in a new Lifetime holiday movie entitled “Light Up My Christmas,” according to People.

The Facts of Life Cast Reunites for Lifetime's Holiday Special You Light Up My Christmas https://t.co/OIDNKMSToA

While they won’t be reprising their roles from the NBC series, Kim Fields (Tootie), Lisa Whelchel (Blair), Nancy McKeon (Jo) and Mindy Cohn (Natalie) will all appear as new characters in the upcoming TV movie.

Fields is executive producing the Lifetime program and was the one who spearheaded getting the girls of Eastland back together.

“It’s been amazing to work together again and have the ladies’ input on their characters from their wardrobe to names, as well as provide fun inside jokes for fans,” the 50-year-old said.

While the show’s matriarch Charlotte Rae (Mrs. Garrett) passed away last year at the age of 92, Fields revealed how they were able to incorporate her into the reunion.

“I also had the production name the ice-skating rink in the movie after our dear friend, Charlotte Rae, who passed away last year,” she added.

“We truly are a family so it was great to work together on something new!”

A post shared by The Facts Of Life (@the_facts_of_life_fanpage_)

Originally a spin-off of “Diff’rent Strokes,” “The Facts of Life” premiered in 1979 and aired for nine seasons before signing off in 1988. The sitcom detailed the lives of four students at the all-girls Eastland prep school.

Fun fact: “Riverdale” actress Molly Ringwald appeared in the first season of the series, while George Clooney was a regular during the show’s 7th and 8th seasons. Neither will appear in the Lifetime movie.

Fans can catch the unofficial “Facts of Life” reunion when “Light Up My Christmas” airs December 1st on Lifetime.