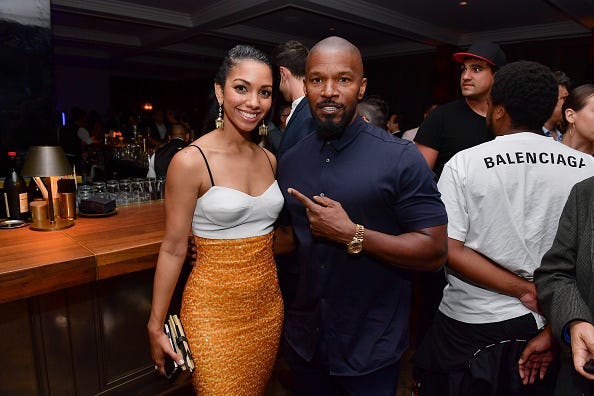 Jamie Foxx is having a typical case of “embarrassing dad” moments by giving daughter, Corinne Foxx, acting advice in light of her film debut in “47 Meters Down: Uncaged.”

Corinne, who plays one of four teenage girls who discover dangerous underwater ruins, had some hurdles to overcome before really nailing her role of Sasha – especially since much of the movie takes place underwater.

According to Variety, Foxx opened up about the struggles she had during filming to reporters at the premiere. “I had very little time to prepare…because I didn’t know how to swim before this movie,” she revealed.

“I definitely didn’t know how to scuba dive, so I had to figure it out in a very short amount of time. We only did about a week of training, and I had to sink or swim,” she explains.

But when it comes to acting in her first film, she had to figure out how to do it on her own. And even though her dad is Jamie Foxx, there was no turning to him for tips. “My dad’s acting advice is the worst,” she says of her father’s coaching.

The "Ray" actor would tell his daughter how “easy” the job is. “Anyone can do it,” he would say. Corinne’s response? “You won an Oscar, of course it’s easy for you.”

The stars (and a few famous fathers) from 47 Meters Down: Uncaged came out to celebrate the world premiere in Los Angeles! .. 47 Meters Down devours theaters on August 16. <<link in bio>>

Still, it’s exiting for Corinne to have her dad as a guest at her own premiere rather than joining him for yet another of his own. “I grew up being on set with my dad and going with him to premieres. So for me to finally have my own and him coming to my premiere – it is so full circle for me,” she explains.