Lindsay Lohan is gearing up for a festive return to the small-screen.

The streamer shared the photo of the actors on Twitter.

“She’s back! Here is your first look at Lindsay Lohan in her upcoming holiday rom-com, co-starring Chord Overstreet,” the post read.

In the photo, both Lohan and Overstreet are bundled up in winter’s finest -- jackets, scarves, and gloves -- as they take a stroll amidst a twinkling background.

The currently untitled film follows Lohan as a “newly engaged and spoiled hotel heiress” who gets into a skiing accident and has a case of “total amnesia” ahead of the Christmas holiday.

Overstreet stars as the “handsome, blue-collar lodge owner” that takes care of her.

Unfortunately, the highly-anticipated film will not debut as part of this year’s holiday programming.

However, the 35-year-old kept busy over the past few years appearing in the long-delayed supernatural thriller, “Among the Shadows”, the British TV series, “Sick Note,” and her own MTV reality series, "Lindsay Lohan's Beach Club.”

Lohan is best known for her roles in “Mean Girls,” “Freaky Friday,” and “The Parent Trap.” 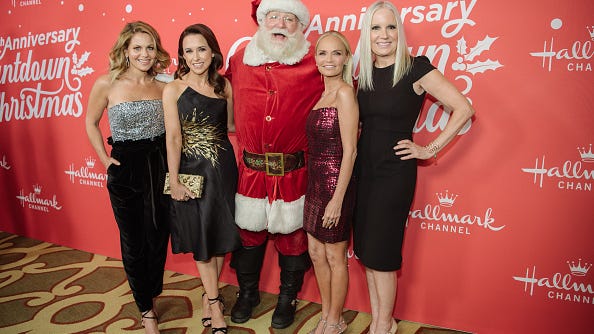 Fans expressed their excitement for her return to acting, noting: “The Lindsay Lohan renaissance is upon us, and I feel seriously blessed.”

Another added: “The comeback we’ve been waiting for.”

Lohan also released a new single in 2020 titled “Back to Me.