I got chills, they’re multiplying.

Olivia Newton-John is once again the proud owner of her iconic black leather jacket from the 1978 film “Grease.”

The jacket was sold for $243,000 in an auction last month to benefit the Olivia Newton-John Cancer and Wellness Centre in Melbourne.

The center was co-founded by the actress after her first breast cancer diagnosis in 1992. 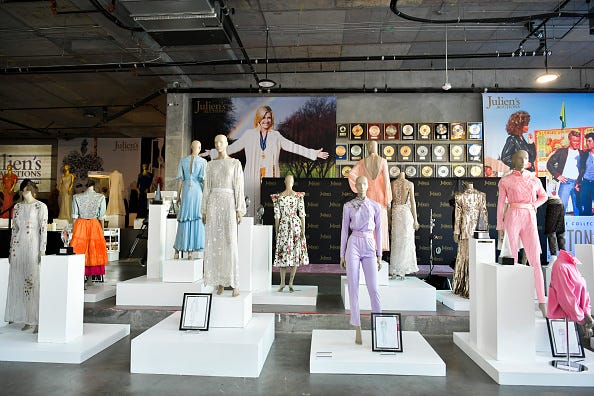 However, the media tech entrepreneur who purchased the jacket is now returning it to its rightful owner.

He still plans to donate the full bid to the center.

The feel-good video was shared on Facebook by Julien's Auctions.

The mystery bidder (he wanted to remain anonymous so his face is blurred) and Newton-John’s self-proclaimed “No. 1 fans” explained why he returned the jacket as she opened a big, pink box.

Here is the full video of what happened following our "Property From The Collection of Olivia Newton-John" auction last...

"This jacket belongs to you and the collective soul of those who love you, those for whom you are the soundtrack of their lives. It should not sit in a billionaire's closet for country club bragging rights," the anonymous buyer said.

"For this reason I humbly and respectfully return it to its rightful owner, which is you."

The buyer also wished the singer – who revealed that she’s battling breast cancer for a third time – a “Godspeed for a quick recovery.”

The jacket will now be on display at Newton-John’s Melbourne center.

“That is the most incredibly generous thing to do for me,” she told the anonymous bidder as she squealed and hugged the jacket.

“I am so grateful, and I am just blown away,” she added.

The jacket was auctioned off alongside the form-hugging black pants famously worn by the actress when she joins John Travota for a duet of “You’re the One That I Want.”

The pants were purchased by Spanx founder Sara Blakely, who called them the "O.G. of black leggings."

Newton-John donated over 500 items from her collection to raise money for the center.