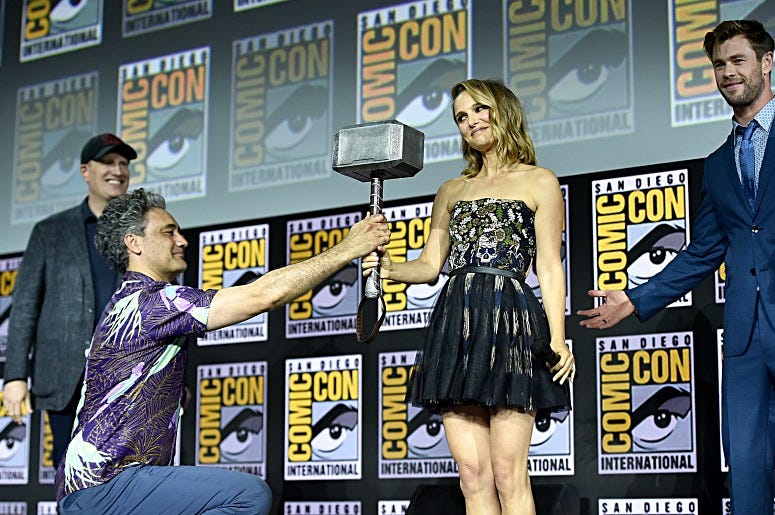 The end was just the beginning for Marvel.

As Avengers: Endgame was becoming the biggest movie of all time, Marvel was at Comic Con revealing the next Phase of their box office domination. It is filled with thrilling casting announcements, new titles, and characters branching out on their own – all in an effort to expand the Marvel universe beyond the core heroes and the big screen.

Director Taika Waititi is back for another edition of Thor, but this time with Natalie Portman returning to the series to pick up the hammer. Portman will be a female Thor, inspired by Waititi reading “The Mighty Thor” where Jane Foster is transformed into the Goddess of Thunder.

The film titled Thor: Love and Thunder is due in theaters on November 5, 2021.

So thrilled to share the news with you today at #sdcc2019 that I’ll be returning to the @marvel #mcu as female Thor with legends @taikawaititi @tessamaethompson and @chrishemsworth. (Remember this as the before picture for when I get jacked)

The return of Portman is just one of the big casting announcements revealed at Comic Con this weekend. Angelina Jolie and Selma Hayek are also set for The Eternals, playing immortal warriors along with Game Of Thrones star Richard Madden and Atlanta star Brian Tyree Henry. The Eternals hits theaters November 6, 2020. And Blade is back too! This time played by Oscar winner Mahershala Ali with a release date to be determined.

In addition to their next collection of theatrical triumphs featuring Black Widow and Doctor Strange, Marvel rolled out several new projects for the upcoming Disney+ streaming platform, set to launch this November. They include several new series featuring the Falcon, Loki, and more.

You can see the full slate for Phase 4 below.

Doctor Strange in the Multiverse of Madness - May 7, 2021

Guardians of the Galaxy Vol. 3 - TBA