Listen to Audacy's Album Release Party with The Lumineers powered by GrubHub
By Lizzy Buczak, RADIO.COM

As the final installment in the “Star Wars” saga, “The Rise of Skywalker,” hits theaters this week, Rian Johnson reflected on his work on the 2017 film in the franchise, “The Last Jedi.”

Fresh off his latest blockbuster murder-mystery “Knives Out,” Johnson stopped by the RADIO.COM “Swings & Mrs” podcast with Jennifer and Cody Decker.

While not everyone was pleased with the direction the film took, Johnson admitted that catering to certain fandoms and what they want to see happen would diminish not only the quality of the film but the storytelling and the experience.

“I think approaching any creative process with that or anything with that second thing you said [making fandoms happy] would be a mistake that would lead to probably the exact opposite result,” he told Jennifer and Cody.

Johnson tapped into his own fan mentality stating that, in his opinion, what fans think they want isn’t what they want at all.

“Even my experience as a fan, you know if I’m coming into something, even if it’s something that I think I want, if I see exactly what I think I want on the screen, it’s like ‘oh, okay,’ it might make me smile and make me feel neutral about the thing and I won’t really think about it afterwards, but that’s not really going to satisfy me,” he explained. 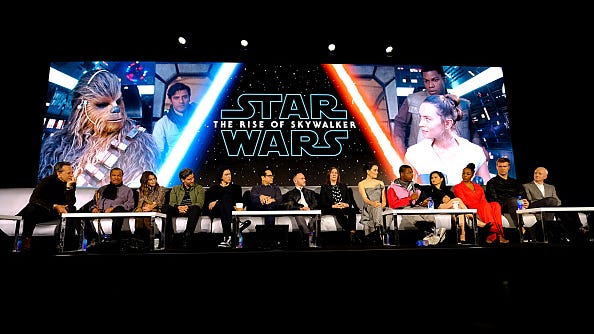 He continued, “what I’m aiming for every time I sit down in a theater is to have the experience you were describing with ‘Empire Strikes Back,’ something that’s emotionally resonant and feels like it connects up and makes sense and really gets to the heart of what this thing is and in a way that I never could have seen coming.

Earlier in the interview, both Cody and comedian Eddy Pence revealed that their favorite moment in “The Last Jedi” was Snoke’s death even comparing the shock-value of it to the chill-inducing “you are my father” scene in “Empire."

It’s those unexpected moments that are essential and resonate with fans, according to Johnson.

He also said that if he tried to appease everyone he’d make a “bad movie” adding “not because what people want is bad but because everyone wants something different.”

In taking on such a massive franchise, Johnson admitted he worked collaboratively with J.J. Abrams of “The Force Awakens” and “The Rise of Skywalker.”

“It was a collaborative process the entire way, but it was launching off of J.J.’s movie and having conversation’s with J.J.,” he said adding that he’d consult the whole story team to “work the whole thing forward."

He noted it the process was important to figure out what the best storyline trajectory would be for the plot and the characters.

Watch the episode below:

See how it all ends when “The Rise of Skywalker” hits theaters on Friday, Dec 20.