From the future to the present, Marty McFly and Doc Brown are back together again.

“Back to the Future” stars Michael J. Fox and Christopher Lloyd reunited virtually during the second episode of Josh Gad’s new Youtube series, “Reunited Apart.” His first reunion episode featured the cast and crew of “The Goonies.”

The 27-minute reunion, which took place ahead of the 1985 film’s 35th anniversary on July 3, also featured appearances from cast members like Lea Thompson, Mary Steenburgen and Elisabeth Shue.

Claudia Wells, who played McFly’s girlfriend Jennifer in the first film before being re-cast by Shue in the second and third, also made an appearance.

Since no reunion is complete without the brains behind the project, director Robert Zemeckis and screenwriter Bob Gale were also on hand to celebrate.

Gad even invited well-known director J.J. Abrams simply because he’s a huge fan of the trilogy.

The feel-good reunion was a jolly good time for the cast and crew as they reminisced about the production and even did some re-enactments of the most iconic and beloved scenes.

And yes, Fox even delivered an updated version of the memorable line: “Wait a minute Doc, are you trying to tell me my mom has the hots for me?”

As reboots and reunions reign supreme, fans always want to know about the chances of it happening. While there’s nothing officially in the works (especially as the coronavirus pandemic shut down most productions in Hollywood), the cast shared some of their best ideas should a sequel ever be considered.

Lloyd, who is a self-proclaimed “Rick and Morty” fan, expressed interest in a crossover. 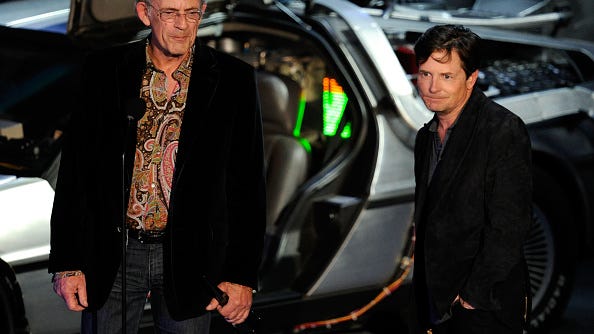 'Back to the Future' Stars Michael J. Fox and Christopher Lloyd Reunite in Touching Photo

Meanwhile, Thompson had an idea we could all get behind: time travel back to January and warn everyone about coronavirus.

For the grand finale, everyone joined in to belt out “The Power of Love" by Huey Lewis and The News.

As many TV show and film reunions as of late including “The Office” and “Pretty Little Liars,” the “Back to the Future” reunion benefited the coronavirus efforts of Project Hope, a global health and humanitarian relief organization