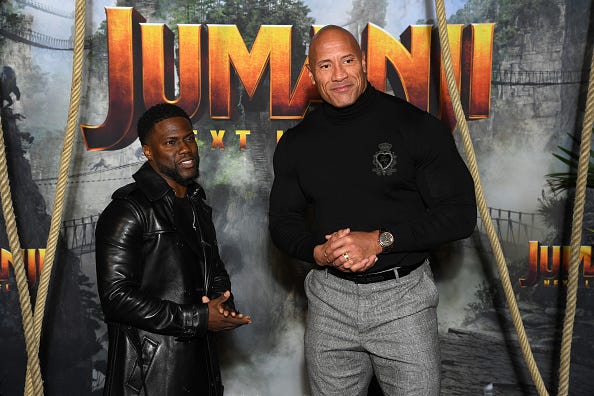 Baby Yoda, I am your father.

At least, that’s what The Rock is telling the “Mandalorian” cutie.

The little green alien has weaseled his way into the hearts of everyone with and without a Disney+ subscription. And that includes Dwayne “The Rock” Johnson.

The former WWE-wrestler-turned-actor took a break from promoting his upcoming film  “Jumanji: The Next Level” to post a picture of himself cradling the baby alien in his arms.

If it seems like a photo of a father cradling his newborn baby, that’s because it is.

A fan account photoshopped Baby Yoda’s face onto a photo of Johnson cradling his newborn daughter shortly after she was born in 2018.

Johnson took this as an opportunity to once-again troll his “Jumanji” co-star and friend, Kevin Hart.

"Thank you all so much for your well wishes, love & support. Can't wait to bring this little nugget home to meet his brother @KevinHart4real,” he wrote alongside the hashtag #IAmYourFather referencing the iconic “Star Wars Episode V: The Empire Strikes Back” line.

Some even recalled an earlier version of this photo that superimposed Hart’s face over Johnson’s daughter's instead.

Johnson posted the previous parody photo in April of last year with a caption that was a less-than-pleasant take on “Twinkle, Twinkle, Little Star.”

Johnson and Hart have been trolling each other and taking hilarious jabs at each other for years now.

A photo of Baby Yoda as Hart’s brother may be the latest, but it's retaliation for Hart’s Halloween costume that mimicked Johnson’s ‘90s look complete with a black turtleneck, gold chain, jeans, and fanny pack.