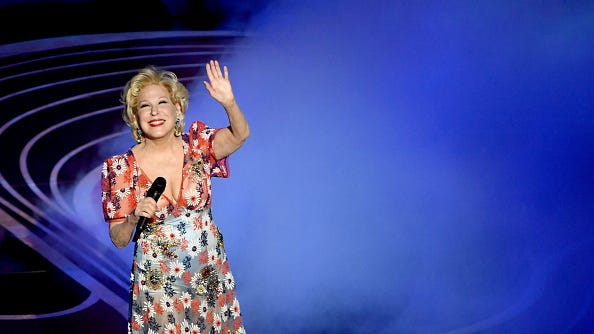 Bette Midler is ready to conjure up Winnie Sanderson again.

Last month, it was revealed that an update to the 1993 film “Hocus Pocus” was in the works at Disney’s new streaming service Disney+.

And while the Halloween classic’s original stars, Bette Midler, Kathy Najimy and Sarah Jessica Parker, are not attached to the project, Midler has now revealed she is up for reprising her witchy role, if asked.

Bette Midler and Kathy Najimy are talking 'Hocus Pocus'! Find out if they are down to be involved in the upcoming sequel! https://t.co/d71In3XBjW

“Oh my goodness me. Oh I hope they get to me before I’m a corpse,”the 73-year-old told “Entertainment Tonight” at her annual Halloween charity gala. “We wanna fly again. I hope Disney+ is a big success and I hope we get to do it, because [Winnie] is, of course, one of my favorite characters.”

Although Midler hasn’t officially jumped on board, she added, "I can't wait to read the script. We're gonna see what happens."

While Najimy, who played Winnie’s sister Mary Sanderson, would also be interested in joining the project, she’s not sure if it will actually happen.

Despite not wanting to get hopes up, the 62-year-old isn’t writing it off completely.

Najimy continued, “[And] if we’re not all available to star in it, I think it would be so great to do a cameo. I think that’d be really fun.”

Meanwhile, Parker, who portrayed Sarah Sanderson, got fans excited for the possibility of an OG reunion after she told one of her Instagram followers, “we have all said yes. Now we wait.”

Little is known of the Disney+ update as no casting or plot details have been revealed.

Perhaps Midler, Najimy and Parker can channel the Sanderson sisters and cast a spell to make this reunion happen.