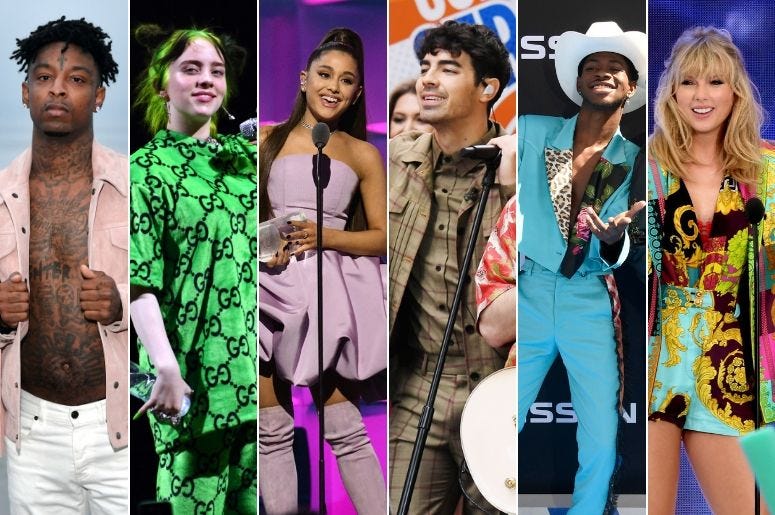 How do we pick just one?

The 2019 MTV Video Music Awards are fast approaching, with some of the biggest names in music competing to put another Moonperson on their shelf. Ariana Grande and Taylor Swift lead all others with 10 nominations each, but there still could be a big surprise at the top for Video of the Year.

Is it Ari or Swift’s to lose, or could the Jonas Brothers take the top award with help from “The J Sisters” in “Sucker”? Are the bars of 21 Savage and J. Cole enough to blast past the competition? Will Lil Nas X add some silver to his record-shattering year? Does Billie Eilish continue raising the bar with her own brand of pop supremacy?

We’ll find out for sure on Monday August 26, when the 2019 MTV VMAs happen live from the Prudential Center in Newark, NJ. Before they announce the biggest award of the night though, we want to hear from you. Who do you think should win Video of the Year at the 2019 MTV Video Music Awards?

You can cast your vote below, but first a look back at the nominees.

21 Savage sits down with better times for his family, flashing between the peace of a familiar gathering and the stark reality of their situations. Featuring a brief intermission from J. Cole and one of the strongest features of the year.

Billie has offered a lot of wild imagery in her short career. It continues with “bad guy,” a vivid and colorful funhouse mirror of mischief. Odd and alluring, like everything Eilish.

Ariana Grande – "thank u, next"

From burn books to “bend and snaps,” Grande inserts herself into all of our favorite films so well it’s tough to remember them without her. Sometimes we check IMDB to make sure Kris Jenner wasn’t really in Mean Girls.

It’s a family affair. The Jonas Brothers launched their amazing comeback with help from their better halves. An excuse for a couples vacation and an excellent entrance into the year of Jonas.

Billy Ray and Lil Nas X go full Back To The Future in a cameo-filled culture clash, on their way to the biggest song in Billboard chart history.

Taylor Swift – "You Need to Calm Down"

We’re still unpacking easter eggs from this one and the album’s almost here. Taylor has a pride party and makes nice with Katy Perry for the hug heard around the world in an instant classic.

These are the nominees, now comes the tough part. Cast your vote below for who you think should win Video of the Year at the 2019 MTV VMAs.

See if your favorite wins on Monday August 26 at 8 PM ET on MTV.