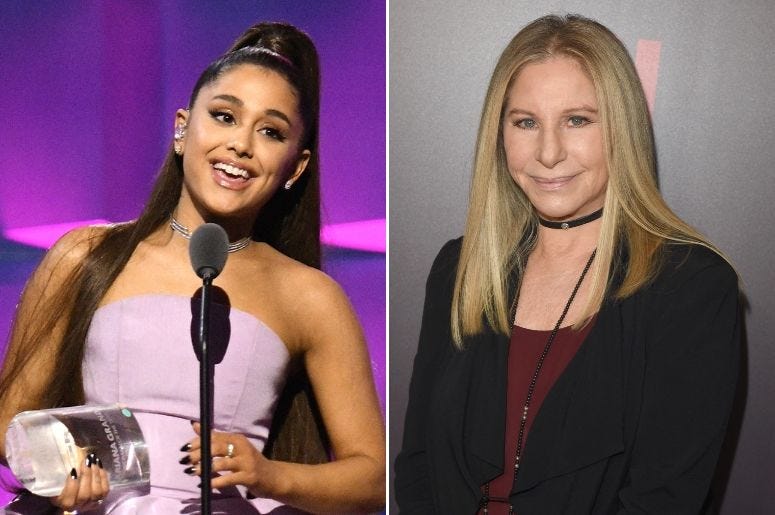 Ariana Grande is a collaboration Queen.

The “7 rings” singer is still in Chicago after her Lollapalooza set Sunday night, taking in some fine dining with very close friends, and even popping up for a song with Barbara Streisand.

Grande surprised fans on Tuesday night at the United Center, by showing up on stage for a duet with the icon. Together they performed, “No More Tears (Enough Is Enough), Streisand’s 1979 song with Donna Summer.

.@ArianaGrande made a surprise appearance at @BarbraStreisand's Chicago concert to perform a duet of "No More Tears (Enough Is Enough)" 🎙 pic.twitter.com/qMndhn5hEw

OH MY GOD I AM CRYING ITS ARIANA AND BARBRA pic.twitter.com/yFmEGsiL5p

a barbra and ariana performance?? we won. pic.twitter.com/Pp4UE9wMgM

The seemingly surprise performance was actually teased earlier in the week, with Streisand sharing a photo of just their hands, captioned, “made a new friend.”

Made a new friend... pic.twitter.com/eSsuMP35wH

After the performance they both shared a smiling picture together. “Hello shaking and crying. Thank you Barbra Streisand” Grande wrote. “Don’t have words yet goodbye.”

On Friday, Ariana unleashed a different collaboration with Social House called “boyfriend.” The moody relationship bop finds Grande trading commitment fears with the duo. In the video, Grande fantasies about revenge and makes out with Mikey Foster of the group.

During an interview at Lollapalooza, Foster and Scootie Anderson of Social House described the set for the clip as haunted and creepy.

“That’s creepy” he exclaimed. “In the basement?”