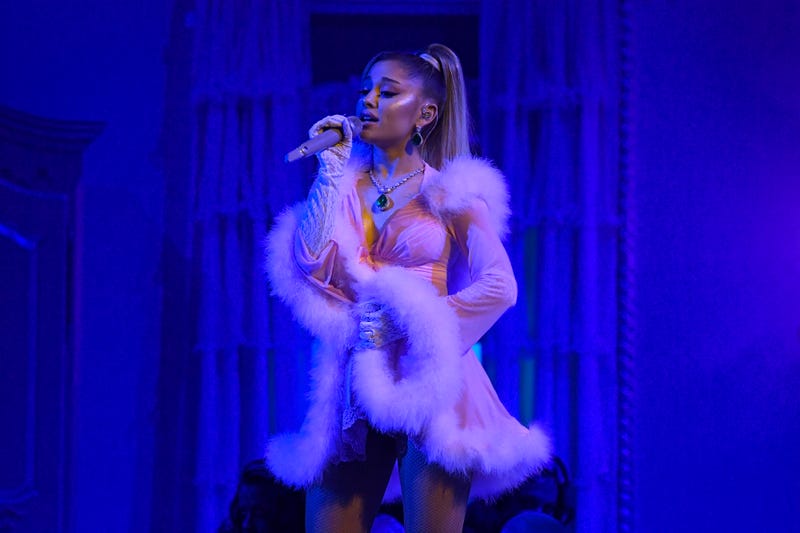 Taking over for Nick Jonas and joining coaches, Blake Shelton, John Legend, and Kelly Clarkson, Ariana Grande is finally arriving on The Voice on September 20.

And to make Ari’s arrival official, all the voice coaches cozied up around a campfire in the competition show’s brand new trailer. As Blake, Kelly, and John sit around the fire gaze up at the night sky, the brightest star they see is Grande sitting on a massive, glowing, paper mache moon.

As she descends from the skies to join her fellow coaches at the warm campsite, Blake tells Ariana that it is tradition for new coaches to serenade all the other veteran coaches. AG quickly breaks into a rendition of Grease’s “Hopelessly Devoted…” with plenty of whistle notes included.

Her beautiful, siren-like song brings out all the animals in the forest… even the park ranger. Shelton strums his acoustic guitar along to Ari’s singing, while Legend and Clarkson provide backup vocals. As they all break into a full performance you see the four coach’s silhouettes dancing in front of a starry night sky.

You know what they say.. the s'more the merrier! @NBCTheVoice is back on September 20th! #TheVoice pic.twitter.com/F7MevVVh6R

Shelton tweeted the new promo video, writing, “You know what they say.. the s’more the merrier! @NBCTheVoice is back on September 20th! #TheVoice”

If you want to fill your music rotation with the best of the best, whether from Lady Gaga, Beyoncé, Ariana Grande, and more, check out Audacy's ICONS exclusive station on the Audacy App.