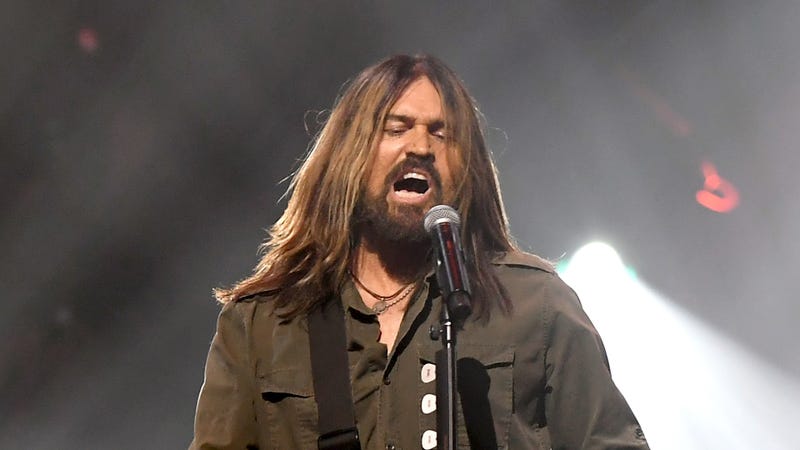 The duo hopped on a video chat with Audacy hosts Christine and Salt at Audacy's 96.5 TIC in Hartford this week, causing the hosts to remember their last in-person interview before the pandemic hit -- none other than Billy's daughter, Noah Cyrus, in March of 2020.

Billy Ray explained how the song "I Got So High, I Saw Jesus," which was written by Noah, was originally supposed to be his song to sing, but he passed on it because of the name and Noah made it a huge hit. "She is such a great singer/songwriter, great artist," he says. But the hosts were sure to remind him that she's not actually a huge fan of his. "No, she's not," Billy Ray laughed. "I watched that one go," he admitted about the single. "I'm gonna cut it one day," he says.

Considering the past year and a half, it's safe to say we're all more than ready for a "New Day." "We're really hoping the energy of the song brings it," FIREROSE says. As for how their pairing came about, FIREROSE explained how she and Billy Ray were working on a completely different track together, but the pandemic put a stop to production since they were stuck on opposite sides of the globe. Working remotely on "New Day," showed them both how it could be done.

FIREROSE also apologized on behalf of the entire Australian continent for nearly taking out America's most beloved movie star couple, Tom Hanks and Rita Wilson, who had both contracted the coronavirus early during the onset of COVID-19 while they were in the country. "That was really embarrassing... they were like the first ones to get it, it was wild. Thank God they were OK, because that was terrifying."

.@billyraycyrus told us on @965tic his fab flow is cuz he secretly wants to be Aquaman pic.twitter.com/OfzY4qf7tb

The topic of conversation then turned back to Billy Ray, more importantly, his flowing locks and whether he has any grooming tips for the longhairs out there. "The best thing to do is keep it short on the top and long in the back," Billy Ray says, invoking the famous mullet. "But I tried that and that didn't go too well. I've lived my life not really knowing what I wanted to do, and just in the last few days I've clarified that. I've decided that I want to be Aquaman." Move over, Jason Momoa... "That's why I'm growing my hair out," Billy Ray says.

Billy Ray has a similar setup in his cabin to the Live From Daryl's House production, which begs the question of whether or not he's thought of filming performances with collaborators the same way. Billy Ray's house is "kind of old and musty," he says. "It's creepy in there and haunted as hell," so he thinks it's a good idea. "I did some levitation last night," Billy Ray admits. "It's nothing for me to wake up and see something zoom across the room or find myself hovering over the bed. There's crazy stuff going on..."

Wait, does he mean "haunted," or "high?" "There's been some marijuana smoked in there, I'll be honest," Billy says with a laugh. "But that's a whole different show."

"It's an old place and there's been a lot of stuff going on there," he says about his home. "Certainly, parts of the Civil War was fought on that land. Some of the immigrants that came over from Ireland, they all played stringed instruments, and they had a little cabin there, and they called it 'Singing Hills.' They all played banjoes and fiddles, stringed instruments, guitars... I call the place 'Singing Hills,' it's still 'Singing Hills' to this day. There's been many a night, and my kids will tell you this, we'll be sitting by the campfire and hear a banjo coming out of the hills... sometimes we hear a banjo coming out of the living room."

Check out the full interview with Billy Ray Cyrus and FIREROSE, and listen to their new single "New Day" above.