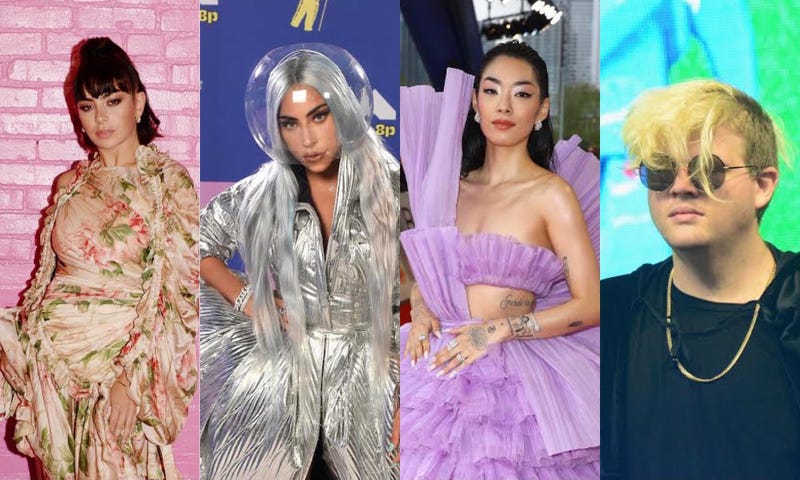 Early on Wednesday morning, Queen of hyper pop, Charli XCX quote tweeted a fan who fervently asked the “Unlock it” singer to “spill about the 911 remix.” Charli cryptically responded by tweeting “the creation process has begun.”

the creation process has begun... https://t.co/Fq3QlYb8ac

Then on Wednesday afternoon the main producer behind Gaga’s Chromatica, bloodpop, tweeted at Charli, asking how “that remix” was coming along. This sent Twitter stans into a tizzy, making further speculations about the possible remix album.

Charli tweeted back at the producer, saying, "I'll send you an idea this week..."

Additionally, Rina Sawayama added to the remix rumor flames during a conversation on the red carpet at the BRIT Awards.

Entertainment reporter, Liv Marks asked the “Chosen Family” singer what was actually happening with the remix record, and Rina teased, “I’ve done my bit,” adding “so it’s in the works and it’s a song that’s hard to sing with my new braces.” Marks speculates, “I’m guessing it’s ‘Alice’?” Sawayama laughs, “the ‘s’’ are actually fine, it’s my ‘fs’ that are a bit weird. The reporter questions, “I’m thinking ‘Free Woman’ maybe?” Finally, Rina smiles and says, “I don’t know, I don’t know there’s a lot of ‘fs’ in the song.

I spoke to my queen @rinasawayama and she spilled https://t.co/OmCRb5NlE6

Thank god for Twitter and the stans, we’ll keep you informed on all things Chromatica remix album-related as they break.

news
This city ranked as country's top 'vaxcation' destination
music
Fieldy takes a hiatus from Korn to get ‘the bad habits out of my system’
music
Run That Back: The Summertime Trifecta
news
Amazon Prime Day 2021: Save up to 60% on Dewalt and Craftsman power tools
music
Dierks Bentley cherishes time spent with young fan before she succumbed to cancer
music
Radiohead, Foo Fighters, Phoebe Bridgers raised $142k for concert workers with custom bicycles