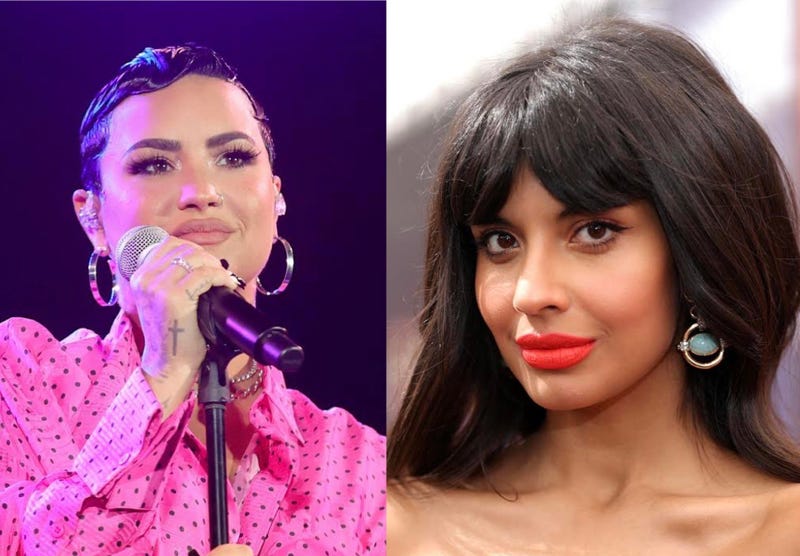 When Demi Lovato and Jameela Jamil first sat down with one another on the podcast, 4D with Demi Lovato, the two stars turned activists joked sarcastically about how “quiet” “unproblematic,” and non-controversial they both are. In reality, both Demi and the I Weigh podcast host are ardent advocates around eating disorders, mental health, and matters of equality, which often leads the two stars to share their opinions and get caught up in social media debacles and controversy.

The Good Place star adds, “almost everyone I’ve ever met in my life is struggling with mental health or has struggled at some point with their mental health. I just want to use my platform and all these gifts that I have to be the person that I didn’t have growing up.”

Jamil tells Lovato that she wishes she had Demi as a role model as she was growing up. She laughs, “but you are younger than me sadly.” She continues, “because you are one of the first people with a huge platform whoever spoke about these things, about eating disorders, about mental health, about addiction. No one else spoke about these things the way that you did.”

The actress and the Popstar also reflect on their friendship and are candid about getting into heated debates, revealing that while they have always been there for one another, sometimes they argue about their beliefs. However, Jameela says that the two have an “empathetic approach to each other’s opposing opinions.”

Both Jameela and Demi often try to look at the humor in situations they are trying to create change within. Jamil will sometimes take a step back when discussing diet culture in an attempt to try to point out how “ridiculous” it is. She says she is not making light of the topic, but rather trying to take a different approach to call attention to the dangers of diet culture.

Recently the actress went viral around the globe after demonstrating the “disgusting” effects diet supplements have on our bodies. Filming from the toilet, and “screaming and s****ing at the same time,” Jameela’s honest and somewhat intrusive viral moment lead to Instagram “no longer showing diet detox products to those under 18, obviously with the help of other charities as well, but that video massively helped,” notes the podcaster.

She also tells Demi, “me being funny and silly about something that I feel very very seriously about made it travel so much further and then ended up creating actual policy globally, that help young people.”

Now Jameela is reframing the conversation around working out in a way that makes it “fun and shame-free.” The star tells Lovato, that in the throes of battling anorexia she would compulsively exercise, and “it was impossible for me to see it as anything I do for myself, it was always something I was doing for the approval of others.”

Jamil says that it wasn’t until last year, during the pandemic, that she started going for walks and looking for “fun ways to exercise.” “The problem for me with exercise… is that exercise for vanity is very destructive, but also it takes a really long time to see results from exercise,” explains Jameela.

However, when exercising for mental health benefits Jamil feels that we get immediate results. “You start to feel more in control of your life, you get dopamine rushes… you feel less stressed, you’re going to feel better, you’re going to sleep better… and so once I started to realize that I was like ‘okay, fine that’s it. I am going to re-enter the world of exercise,' but this time only for my mind.”

Listen to Demi’s full interview with Jameela Jamil above.