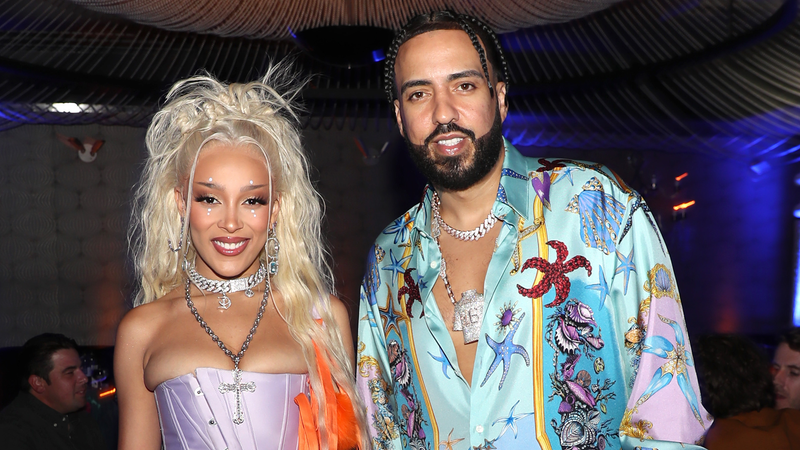 It's a whole lot of anarchy in the new "Handstand" video, as French Montana, Doja Cat and Saweetie throw a post-apocalyptic street brawl thats giving The Warriors-meets-Terminator vibes with a side of Fembot.

If you’re still not intrigued, first of all - ummm how? And second of all — this’ll surely do the trick. The video was directed by Edgar Esteves and Jon Primo also features a laser-eyed villain, baseball bats wrapped in barbed wire, and Doja Cat in a “metal bikini top outfitted with machine guns like a 21st century Barbarella”, and Saweetie… well being Saweetie, but in front of a city in flames.

Alright now that we’re all on the same obsessed page, let’s talk music. Even with sampling vibes and referencing lyrics from “It’s So Hard” by Big Pun featuring Donell Jones, don’t get it twisted “Handstand” stands alone. Featuring two of the the “hottest female MCs in the game” serving up raunchy and raucous bars. Along with French’s hypnotic verse, it makes for the perfect post-apocalyptic trifecta.

“Handstand” comes off of Montana’s newest record, They Got Amnesia, which also boasts features from Lil Durk, the late Pop Smoke, John Legend, and more.

“This album reflects my personal journey, so it’s the most special for me,” French Montana said in a press release. “God gave me another chance at life and this music healed me. I’m grateful to my collaborators and my fans for supporting me. I had to remind ‘em, ‘cause you know they got amnesia!”

Collecting “close to 7 million streams since the record’s arrival in November,” but something tells us with the release of the music video and general twerk-able vibes of the track, that streaming number will be reaching new heights for sure.

If you haven’t already, see why for yourself — Check out the video for “Handstand” below.