Dua Lipa was very busy at the 2020 GRAMMY Awards, joining host Alicia Keys on stage to present the Best New Artist award to Billie Eilish. Last year’s winner of the category looked stunning, but before she hit the red carpet she had a question for all the attendees of music’s biggest night.

During our talk with the “Don’t Start Now” singer before the awards, Lipa has something that she wanted everyone to answer. “I wanted to send you a question that I feel like nobody else is gonna ask,” she smiled. “What would you think is nostalgic in the future?”

Playing off the title and concept of her upcoming sophomore album, Future Nostalgia, Dua’s question was perfect for our favorite artists. A chance to predict our fate of what we’ll long for once all the flying cars and robot best friends take over the world.

“It’s been a very exciting year. We’ve had a Hip Hop Country song,” says GRAMMY-nominated producer Jeff “Gitty” Gitelman. Nominated for his work on H.E.R.’s I Used To Know Her, he knows we’ll always remember our trip down “Old Town Road.”

“We’re gonna look back on it.” 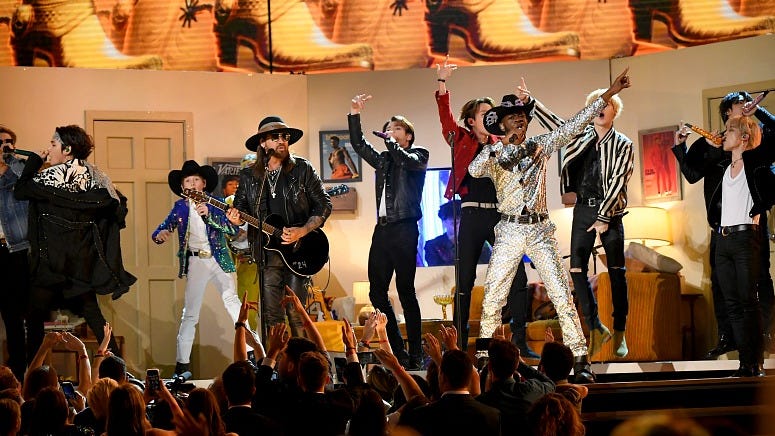 From memes to fashion, there are a lot of things that are popular right now that we might eventually be nostalgic for. Bring Me The Horizon thinks we’ll one day miss our Amazon Echo, or even “flaming eyebrows” according to Oli Sykes.

“Lizzo’s Instagram posts,” laughs the GRAMMY-winning duo of The Okee Dokee Brothers. The pair nominated for Best Children’s Music Album already know that we’ll need that spirit again in your lives. “We’ll all come back and be like, ‘ugh, they were just so good.’”

Speaking of Lizzo, we had a question of our own for the red carpet. Finish the sentence, I’m 100 percent that blank. No DNA test needed.

See more from the red carpet in the video above, and see all of our coverage of the 2020 GRAMMY Awards here.