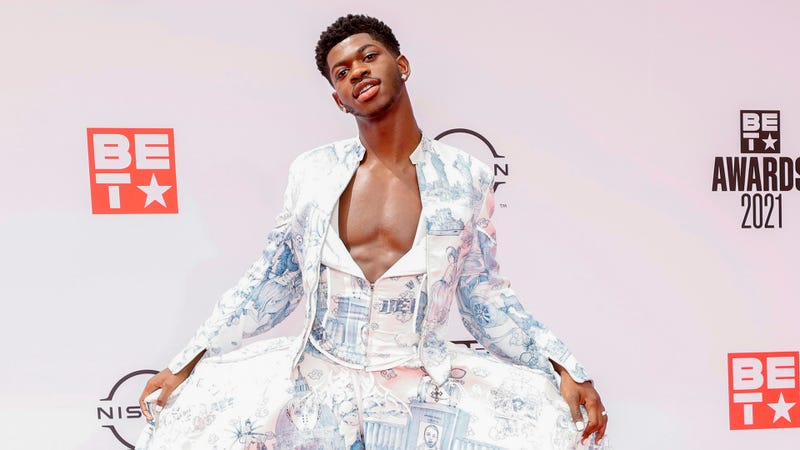 Lil Nas X’s debut album, MONTERO, has arrived and the deeply personal, sexual awakening, playing out for fans across the globe, doesn’t just feel triumphant, it feels like the artist was able to tap into his most vulnerable inner conversations to deliver a new Pop mainstay.

Lyrically, LNX employs experiences related to loneliness and understanding being gay in order to weave a tale about self-acceptance and embracing his identity.

The 22-year-old, whose birth name is Montero, gives us glimmers of candid truths, while still staying true to his esoteric meme-culture vernacular.

On tracks like “INDUSTRY BABY,” the artist oscillates between his facetious Twitter tone and the difficult backlash he has faced as an openly gay artist, with lines like “I don’t f*** b****es, I’m queer, ha” to more hard-hitting personal anecdotal lyrics like, “You was never really rootin’ for me anyway.”

But despite nay-sayers attempting to gate-keep LNX’s artistry, the meme-binding, pole-dancing, the superstar has tapped into a sensitive side and used this moment of his debut release to put a giant middle finger up to the doubters, s**t posters, and haters.

Enlisting help from Elton John, Megan Thee Stallion, Doja Cat, and Miley Cyrus, the singer boasts features from some of the industry’s best and brightest on his first full-length record. While many rap albums contain a certain braggadocious air to them and don’t always divulge personal substance, the “Old Town Road” rapper turns his pain into pride, letting fans know that we’ll “never forget” him.

On songs like “AM I DREAMING,” featuring Miley, the artist is chillingly forthright, revealing insecurities despite being at the top of his game. While on the track, “THAT’S WHAT I WANT,” the upbeat earworm, reveals the artist’s deepest desires in the most relatable Pop love song kind of way.

Exploring all the corners of loneliness, sexual identity, and love, Lil Nas X glides through all 15 tracks on his album, using the central pillars of Hip Hop and Pop, to give voice to a new generation of LGBTQ+ youth coming up in the age of Twitter memes, Reddit threads, and TikTok trends.