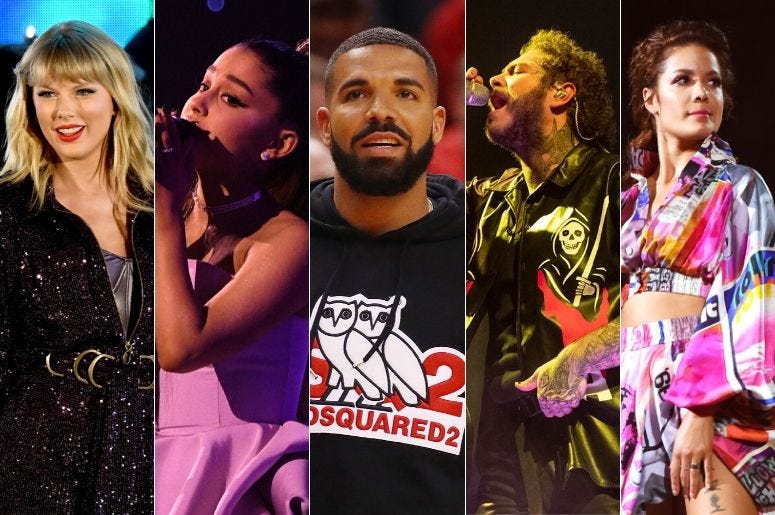 Just days away from the 2019 American Music Awards and it’s time to start asking the tough questions. With the drama seemingly over and the stars all set to be together on Sunday November 24 at the Microsoft Theater in Los Angeles, we’re ready to get down to business.

Who do you think will win Artist of the Year at this year’s AMAs? Will Taylor Swift repeat and pick up her record 5th win for the biggest category of the night, or is this when Ariana Grande returns to the top? Maybe it’s time from Drake to collect another trophy, or perhaps it's Post Malone or Halsey that will outshine them all.

The best part of the American Music Awards is that it’s ultimately up to you to decide, with fans casting their vote for the winner. So before the big night arrives, here’s one last chance to make your voice heard. Who should win Artist of the Year at the 2019 American Music Awards?

You can cast your vote below, but first a little more about our nominees.

We already know she’s the Artist of the Decade, but will she be the Artist of the Year? Taylor Swift returned to her bright and beautiful ways this year, adding a burst of color after the end of the Reputation era. The “You Need To Calm Down” singer has one of the top-selling albums of the year, and one of the best chances to walk away the biggest winner at the 2019 AMAs.

Grande took over the charts in 2019, doing things that haven’t been seen since The Beatles, then she took a victory lap around the world with her Sweetener World Tour. It’s been three years since Ariana was the Artist of the Year, but two number one albums in less than a year is more than enough evidence that she’s ready to return.

Drake is nominated for the third year in a row. He’s been more visible courtside then in the music world this year, only offering up a few loose tracks, but, he’s Drake. Always a presence that looms over Hip Hop and beyond, does Champagne Papi finally get an AOTY trophy to go with that ring?

How do you follow up one of the biggest albums of the year? You invite Swae Lee, Ozzy Osbourne, Travis Scott, and more to send your third LP into hyper speed. Hollywood’s Bleeding has once again sent Posty to the top, flexing through unshakable songs and sold out shows.

Halsey went next level in 2019, hitting number one for the first time as a solo artist. Not bad for a one-off track between albums. But the confessional nature of “Without Me” helped inspire something special for the singer, and the Manic era looks to be exciting and honest. Have the previews been enough to take home the night’s top prize?

Now you know where they stand, the question is how will you vote? Make your choice now for Artist of the Year, and watch to see who wins at the 2019 American Music Awards, this Saturday November 24 at 8pm on ABC.