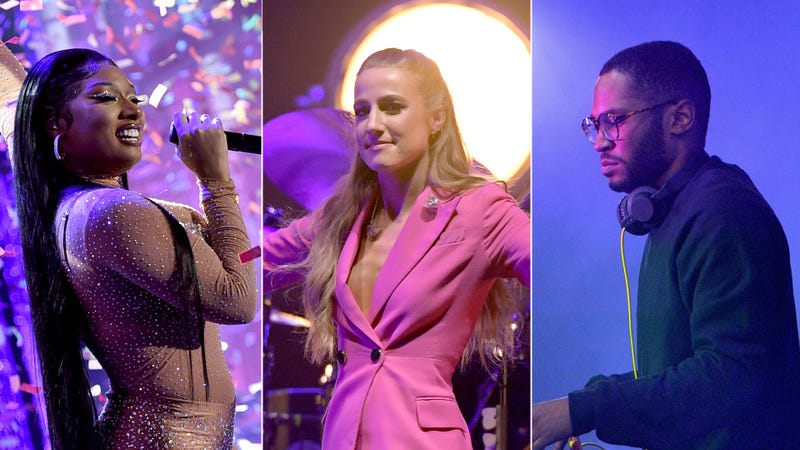 While we prepare for quite a different show than we've become used to, this year's nominees for Best New Artist will probably not even notice through all of their excitement. Country newcomer Ingrid Andress, Alt-songwriter Phoebe Bridgers, singers Noah Cyrus and Doja Cat, rappers CHIKA, D Smoke, and Megan Thee Stallion, and Canadian DJ Kaytranada are all up for the coveted award next Sunday.

With the celebration just days away, we want to hear from you. Take a look at all the nominees for Best New Artist below and cast your vote for who you think should take home the trophy!

Country newcomer Ingrid Andress brought it home in 2019 with her hit "More Hearts Than Mine" and followed its success with her very first album Lady Like in early 2020. Already a staple on RADIO.COM's Back To Back with Katie Neal, Ingrid is an absolute frontrunner in this race as the Country world continues to make its way into all corners of musical life.

Amala Ratna Zandile Dlamini (Doja Cat) broke onto the scene with her proficient use of social media apps like TikTok. The L.A.-based singer, rapper, and producer became a household name with her hit "Say So" and subsequent remixes from the Queen, Nicki Minaj. Already a winner of two AMAs and an MTV VMA, she's looking to up the ante this year with a total of three GRAMMY nods.

Jane Chika Oranika was signed to Warner Bros. in 2019 with only one self-produced EP under her belt. Through her use of social media and catchy hooks, she's more than earned her GRAMMY nod this year as well as an NAACP Image Award nomination for Outstanding New Artist.

When she's not soundtracking social media trends, at least one of Hot Girl Meg's songs can be found on just about every music lover's playlist. Meg's 2020 debut Good News featured her number 1 hit single "Savage (Remix)" featuring Beyoncé, and her collab with Cardi B, the eye-popping "WAP," which no doubt cemented her as another artist to watch in this contest.

Child of Billy Ray and Tish, sister of Miley -- Noah Cyrus comes from musical royalty and her breakout into the musical realm after being named one of TIME magazine's most influential teens a few years prior was a long time coming. She made a name for herself, and arguably outdid her sister with the release of her video for "All Three" in late 2020 and that nude bodysuit she donned next to singer Jimmie Allen at the 2020 CMAs.

California rapper D Smoke first gained popularity after winning the 2019 season of Netflix's music competition show Rhythm & Flow and capitalized on that success by independently releasing his debut Black Habits the following year. His hard work has earned him nods for Best Rap Album as well as Best New Artist at this year's GRAMMYs.

Haitian-Canadian DJ and producer Kaytranada (real name Louis Celestin) got his start a decade ago under the alias Kaytradamus. In 2014 he signed a deal with XL Recordings, releasing his critically acclaimed debut 99.9% in 2016. In 2019 he released the follow-up, Bubba, which has earned him three 2021 GRAMMY nods -- Best New Artist, Best Dance Recording for his single "10%" with Kali Uchis, and Best Dance/Electronic Album.