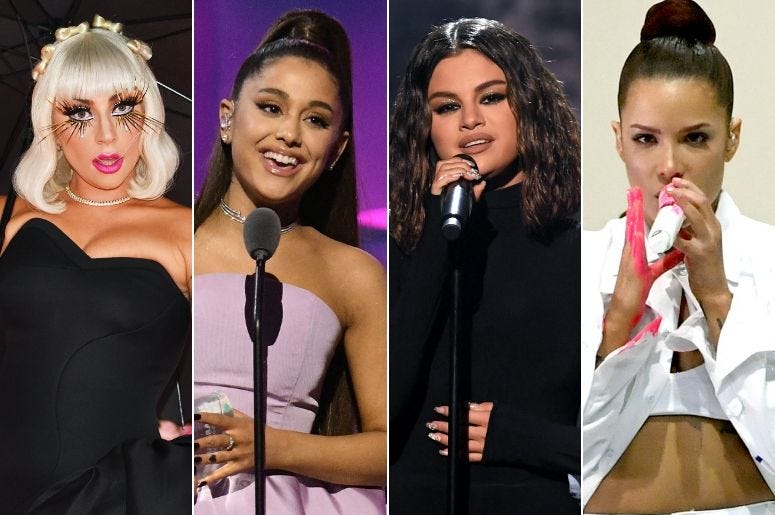 We had horses in the back and at the top for a record-setting 19 weeks this year, as “Old Town Road” ruled the charts from April to August. However, before and after Lil Nas X it was a year dominated by the women of music, with 8 female artists landing a song at number one in 2019. For 23 weeks these Queens looked down from the number one spot, with more women taking the top position this year than any other time this decade.

2019 was packed with surprises. New talent bursting into the mainstream, songs that have been rediscovered, and one that finally ascended to the top after 25 years. From self-love anthems to a Christmas classic, these are the fierce females that ruled 2019.

The beginning of the year belonged to Ariana Grande, at one point having the top three songs in the country, something that hasn't been accomplished since The Beatles did it in 1964. Thank U, Next arrived in February while we were still composing ourselves from Sweetener, as the singer continued her hot streak into 2019. Grande is one of two artists to land two songs at number one this year, along with Post Malone. Both "thank u, next" and "7 Rings" made visits to the top.

Halsey hit a new level in 2019, securing a solo number one song for the first time with "Without Me" and elevating to a new pop plateau. She did it how she's always done it, with honesty and sincerity, and refusing to hold anything back. The rest of the world finally caught up to what Ashley Frangipane was doing, and 2020 looks to be even bigger with her third studio album, Manic, arriving on January 17.

Thanks to a performance at the Oscars that still has us sweaty, Gaga's A Star Is Born duet with Bradley Cooper shot to number one 6 months after "Shallow" was first released. A tribute to a powerful song and an amazing moment. It is hard keeping it so hardcore, and even harder to wait for Gaga's sixth studio album which we hope to hear next year.

Only the one true chosen one had the power to topple Lil Nas X and "Old Town Road" from its record-setting run atop the Billboard chart. Billie Eilish is the one, accomplishing more before 18 than many artists hope for in a lifetime. The first artist born in the 2000s to have a number one album ended the reign of Lil Nas X with "bad guy," and that's still not close to the biggest thing she did this year.

We watched a real-life love story unfold in-between the notes of "Señorita." Shawn Mendes and Camila Cabello went from friends to much more within weeks of the song's release, and their steamy collaboration shot to the top in the heat of the summer.

No test needed, Lizzo 100 percent had one of the best 2019s on the planet. When you've got that "Juice" everything you touch turns to gold. "Truth Hurts" was originally released in 2017, but the power of Lizzo and a Netflix trailer compelled it to the top.

Selena season is coming, with a new album arriving next month. The new era officially kicked off in October with "Lose You To Love Me," and fans couldn't wait to welcome her back, giving her the first number one song of her career.

After 25 years, "All I Want for Christmas Is You" finally took a seat at the head of the table, with the 1994 song landing at number one. The anniversary helped put the modern Christmas classic on top, but with it being so inescapable and so so good, it feels like this could be a yearly tradition in the making.