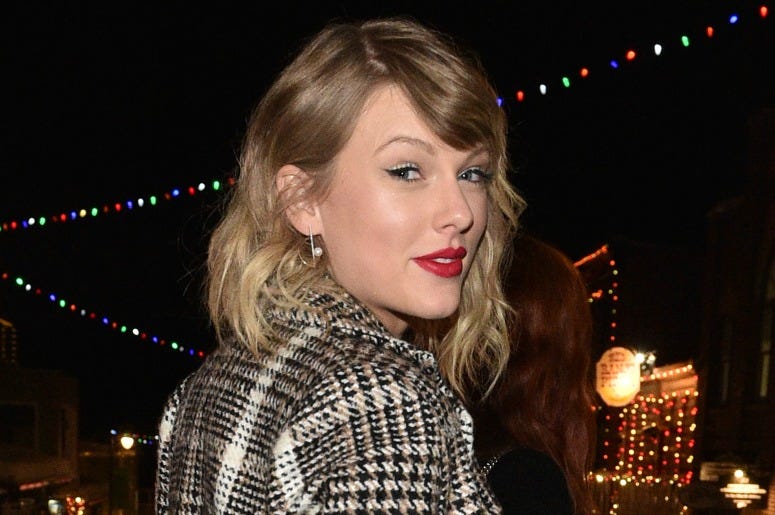 Remember back in July when Taylor Swift did something she had never done before and dropped a surprise album? Remember when she went ahead and did it again last night?

Evermore marks Taylor’s ninth studio album. We’re not great at math (ahem, writers) but that means that Swift has released a third of her studio album discography in less than a year and a half. Oh, and she owns them too.

Billed as a sister to July’s folklore, evermore compliments it beautifully. Where folklore is a novel, evermore is a film. Folklore is the rest of the world in back and white, and evermore is screaming color. You get it.

While less than 24 hours is barely enough time to scratch the surface of a Taylor Swift album, especially one with 15 tracks (can you believe we still have two more to go?!) we have picked our favorite lyrics, at the moment, from her transcendent ninth album.

The opening track of the album is electric. It does that “goosebumps down your back” thing that great songs do. It is the lead single from the album, and a video (directed by Swift) launched at midnight as well. The video continues the journey of the “cardigan” video and Taylor herself said that the video shows how she feels about fame, and pays homage to other tracks on folklore. It’s a perfect opening track for this journey.

In the live chat on youtube leading up to the drop of the album, Taylor warned this track was NOT bubbly, and she was right! Two people are very different ideas for what might be their last night together and it bleeds young love. Pop open a bottle of bubbly and dive deep into your feels for this one. This is a track to wallow to, whether you need to or not.

"Your Midas touch on the Chevy door
November flushed and your flannel cured
'This dorm was once a madhouse'
I made a joke, 'Well, it's made for me'"

Jack Antonoff’s chosen favorite, the melody of “gold rush” is infectious. We love to see Taylor repeating themes and “man you are so hot everyone wants you” is definitely one of our favorites. Going on four albums of it now! This track also mentions folklore by name, and we love a callback. Also, it is now canon that Taylor has said “Go Birds.”

This is the track for anyone who has gone home for the holidays and daydreamed about seeing your high school crush in Target and falling in love for a few days. This opening line though. TAYLOR! The early Taylor teen angst is back and we truly love to see it. This guy probably never let Dorothea drive his stupid old pick up truck but now that she’s on TV he will totally hand her the keys. Typical.

“If I wanted to know who you were hanging with while I was gone, I would have asked you.”

Oh hello track five, how are you today? If you know anything about track five, you know it is a place of honor on a Swift album and most likely will rip your heart out and welp. Yeah. "tolerate it" does just that. Oof ok. *goes to Zocdoc to find a therapist*

“While you were out building other worlds, where was I?
Where's that man who'd throw blankets over my barbed wire?
I made you my temple, my mural, my sky
Now I'm begging for footnotes in the story of your life”

No body, no crime

If you had “2020 is the year Taylor will collab with the HAIM sisters and modernize 'goodbye earl' for the murderinos” on your bingo card for the year, well congrats. You won. If your bingo card also said “Taylor will namecheck Olive Garden in a song.” Congrats, you also won.

In the live chat, Taylor warned that "happiness" was a deceptive title, and again, she nailed it. This is the seventh track and it mentions the number seven quite a bit and we love the SYMMETRY of it all.

Taylor has also said that Dorothea, in her mind, went to the same school as Betty, James and Inez. This seems like another track from a boy’s perspective, which is such a great dichotomy on these albums. This track is the sister song to "’tis the damn season” from not-Dorothea’s perspective and it has that same earnest tone as "betty" that made the latter a standout track on ‘folklore’.

“When it was calmer, skipping the prom just to piss off your mom and her pageant schemes
And damn, Dorothea, they all wanna be ya
But are you still the same soul I met under the bleachers? Well…”

Honorable mention:
"And if you're ever tired of bеing known for who you know
You know, you'll always know me, Dorothea

We like to think that The National saw Aaron Dessner having a ton of fun with Taylor and wanted to get in on it. This track sees vocals from The National singer Matt Beringer. And has some of the lyrics that have stuck with us the most through our listens through the album.

“'Cause we were like the mall before the internet
It was the one place to be
The mischief, the gift-wrapped suburban dreams
Sorry for not winning you an arcade ring”

I V Y! Honestly, we’re speechless. If you don’t stan this track, don’t @ us. It’s perfect. We need 100 YA novels with vibes like this song.

"Oh, I can't
Stop your putting roots in my dreamland
My house of stone, your ivy grows
And now I'm covered
In you"

Taylor swears now and it rocks.

Taylor knows how to write a bridge and this track puts us on the express train to bridge city! Also, it namechecks the album name, which we love.

Taylor said that this song was inspired by her grandmother, and during this time of year, it really got us missing our loved ones we haven’t been able to see and those who are no longer with us. She said in the live chat leading up to album dropping that the opening lines were her favorite at the moment, and we agree. They are a great reminder for us all right now.

More of that Taylor teen angst we love. This song is such a good penultimate track as you can really feel the energy build. And these lyrics are just too good. Who NEEDS you, Trevor leave us alone with our THOUGHTS and our CANDLES!

"Don't treat me like
Some situation that needs to be handled
I'm fine with my spite
And my tears, and my beers and my candles"

The titular track is a duet with Bon Iver’s Justin Vernon. While he sings on three tracks, this is the only one with a feature. His vocals are very early-Bon Iver, and just like "exile" this is a track to listen to if you need a really good, dramatic cry.