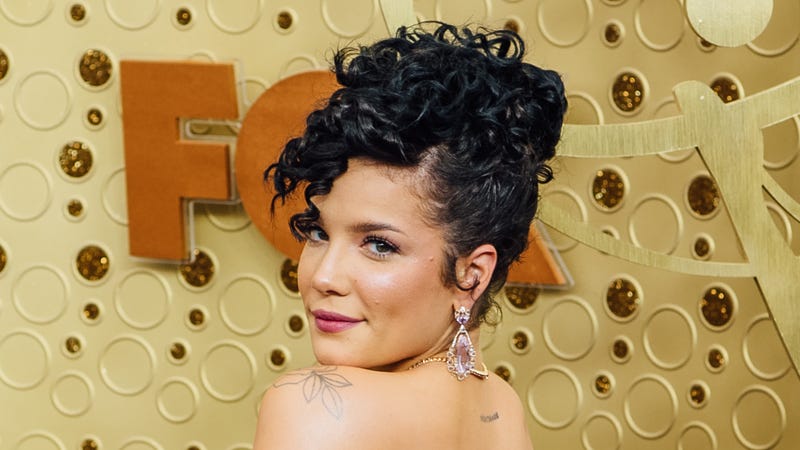 Halsey’s hair has gone through a lot of looks, and that’s the long and the short of it.

Ever since breaking out on the Chainsmokers’ hit “Closer” in 2015, the New York-based starlet -- whose birthday is Sept. 29 -- has turned heads with her bright, colorful hairdos as much as with her music.

No stranger to trying out different styles, the pop songstress has no end to her many hairstyles. From teals and fuschias to crimps and shaved heads, these are Halsey’s best hairdos over the years. 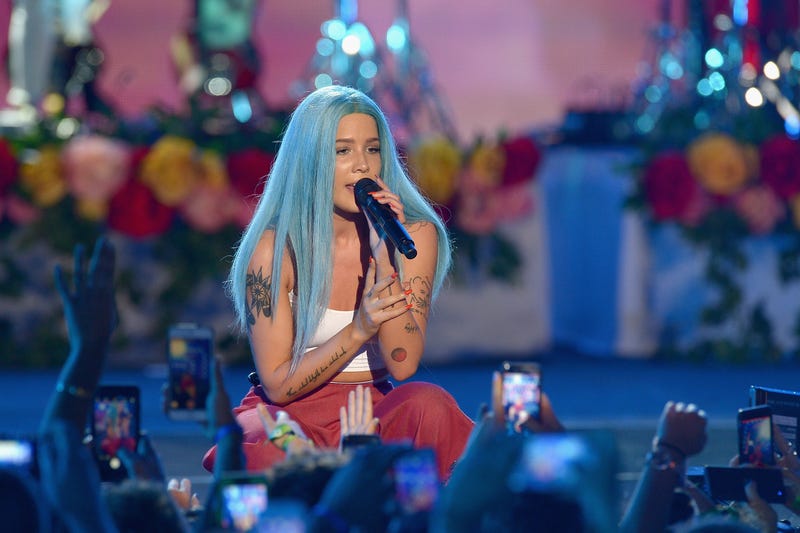 No one pulls off the cyan quite like Halsey. The singer looked like she just jumped out the water with this mermaid teal look at a summer performance in 2017. 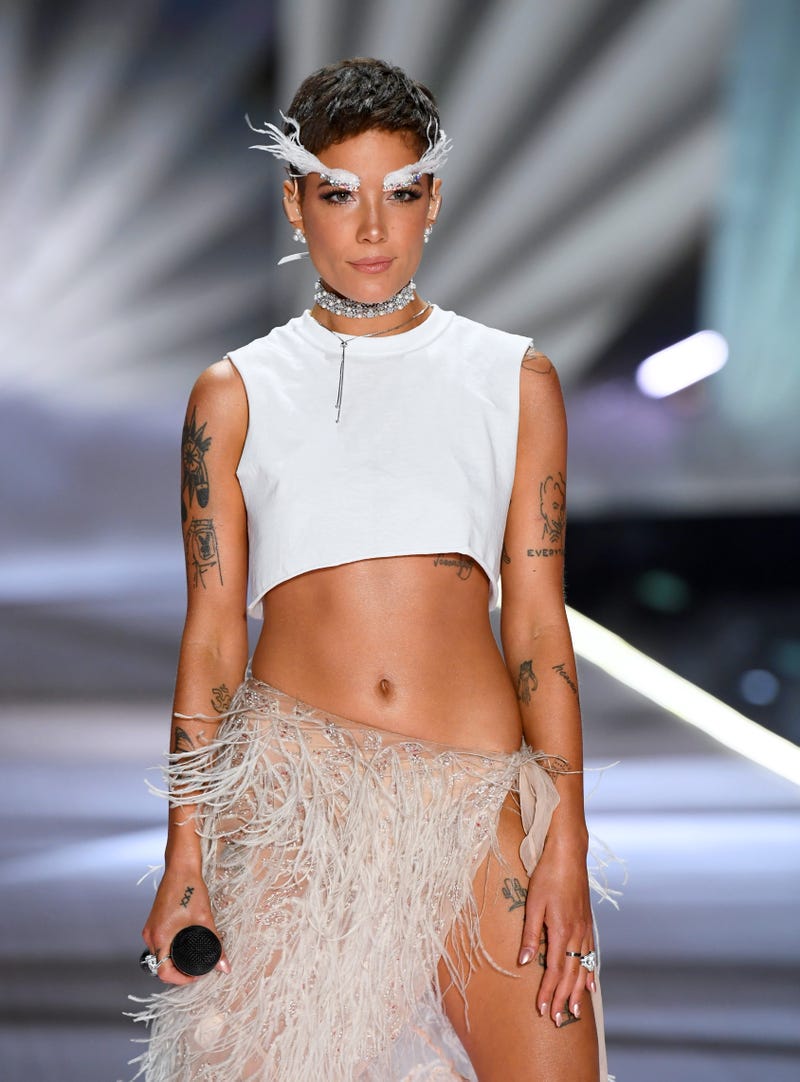 The chic black pixie cut isn't so crazy, but you'll raise an eyebrow at these silver brow extensions Halsey modeled at the 2018 Victoria's Secret Fashion Show. 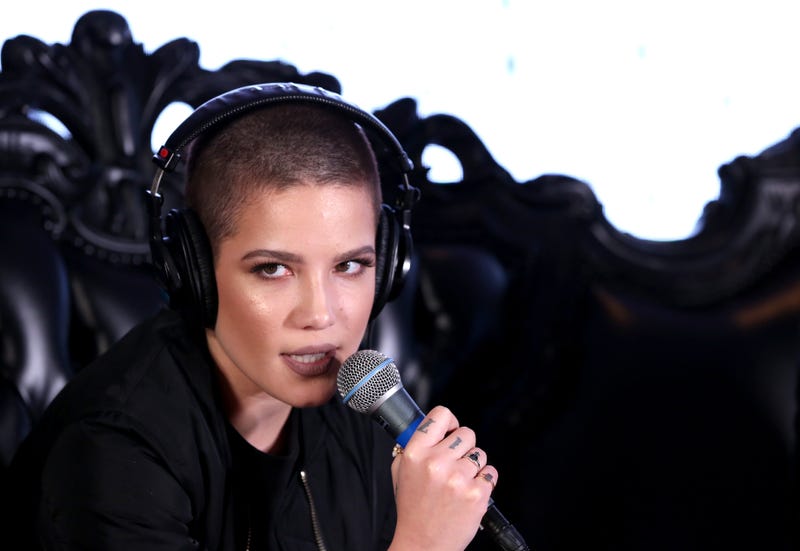 Sometimes you gotta hack it all off, like Halsey at the KROQ Almost Acoustic Christmas 2015. 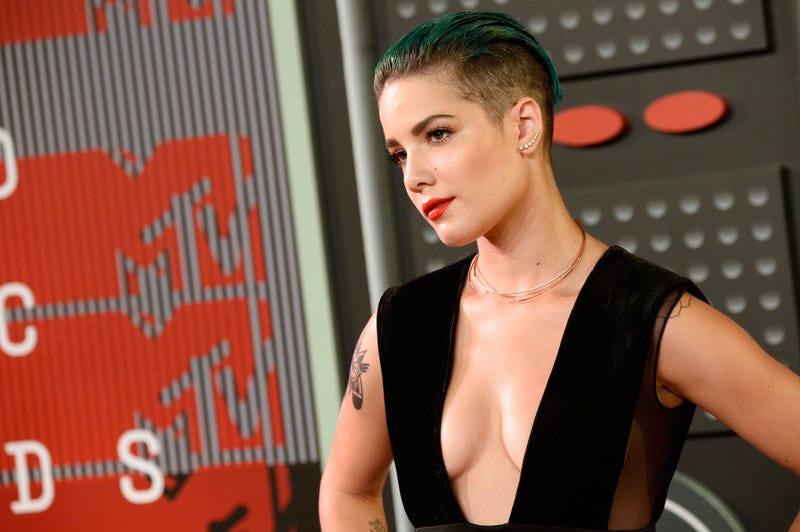 Halsey kept it high and tight with this forest green pixie/undercut hybrid that she wore to the 2015 MTV VMAs. 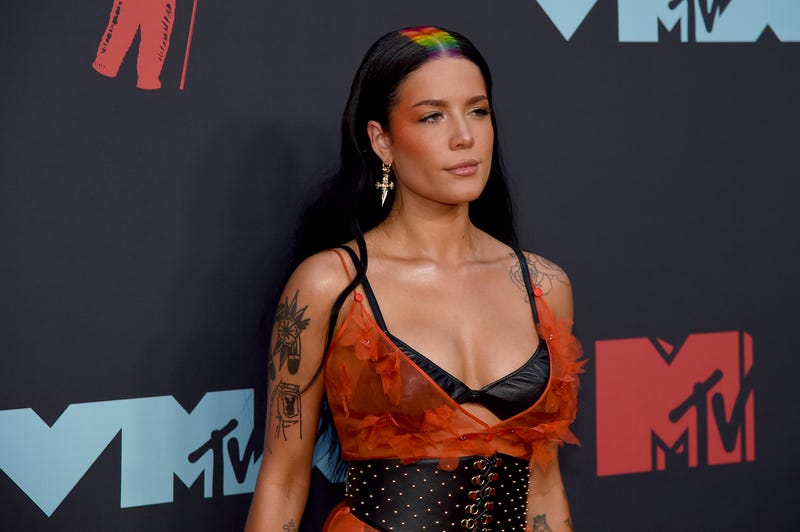 If you only saw Halsey in profile at the 2019 MTV VMAs, you may not have gotten the full experience of her multi-colored 'do -- a rainbow strip styled down the center of her long, parted jet black hair. 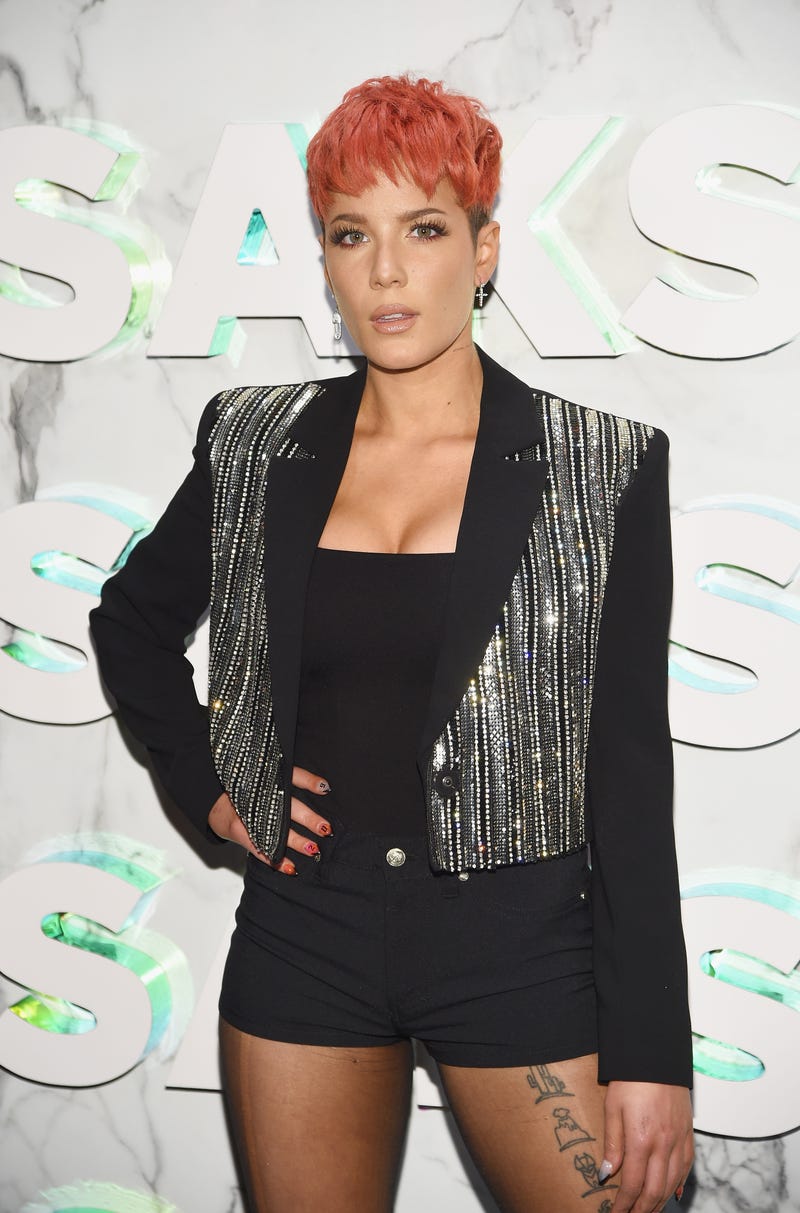 You gotta show out for Saks. Halsey rocked this soft but bold pink look to celebrate the store's new main floor in February 2019. 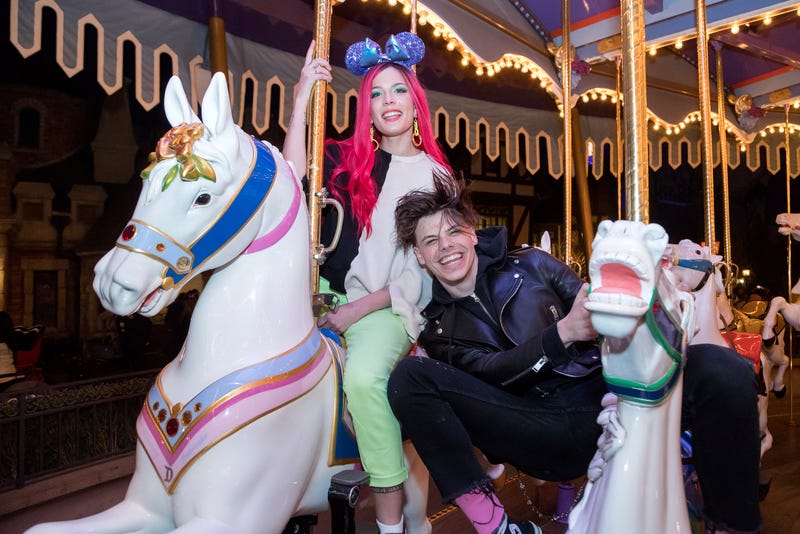 This bubblegum look screams "I'm going to Disneyland!" Halsey and her now-rumored ex Yungblud took this photo at the park in Anaheim in February 2019. 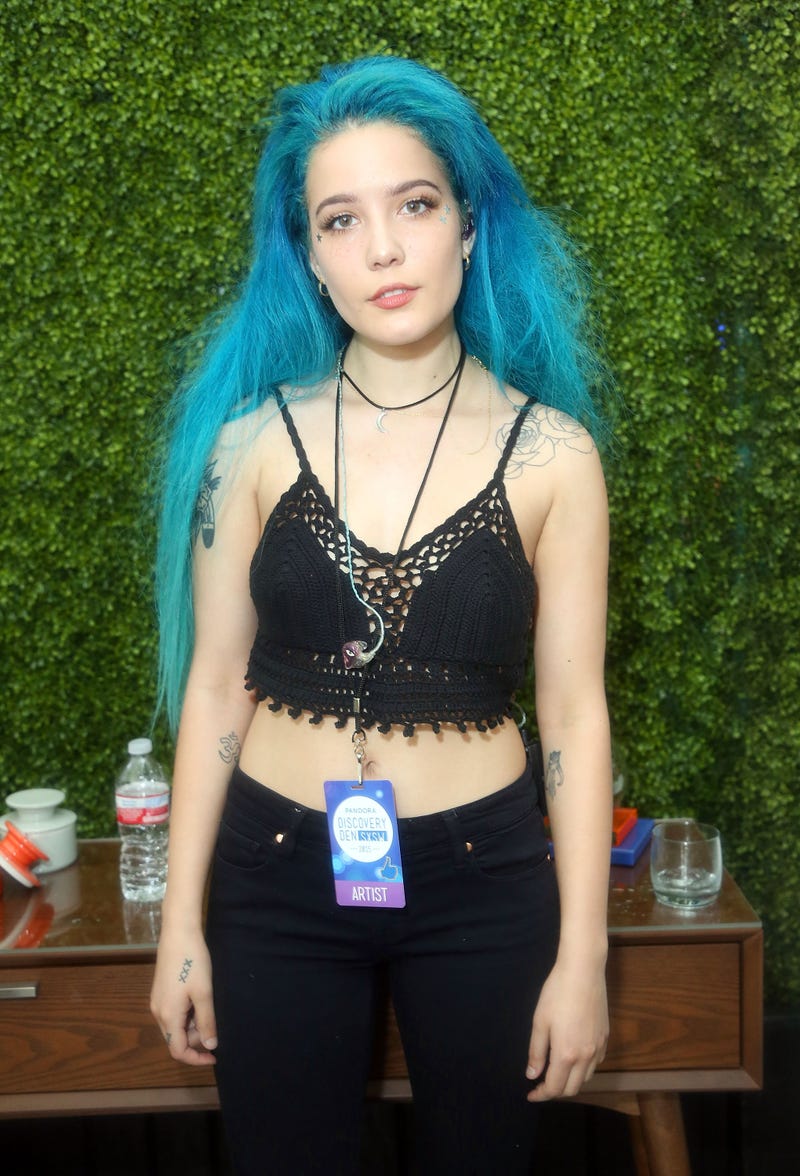 Out of the Blue

Halsey's experimented with a few shades of the pale primary pigment, even as far back as this 2015 appearance at SXSW. 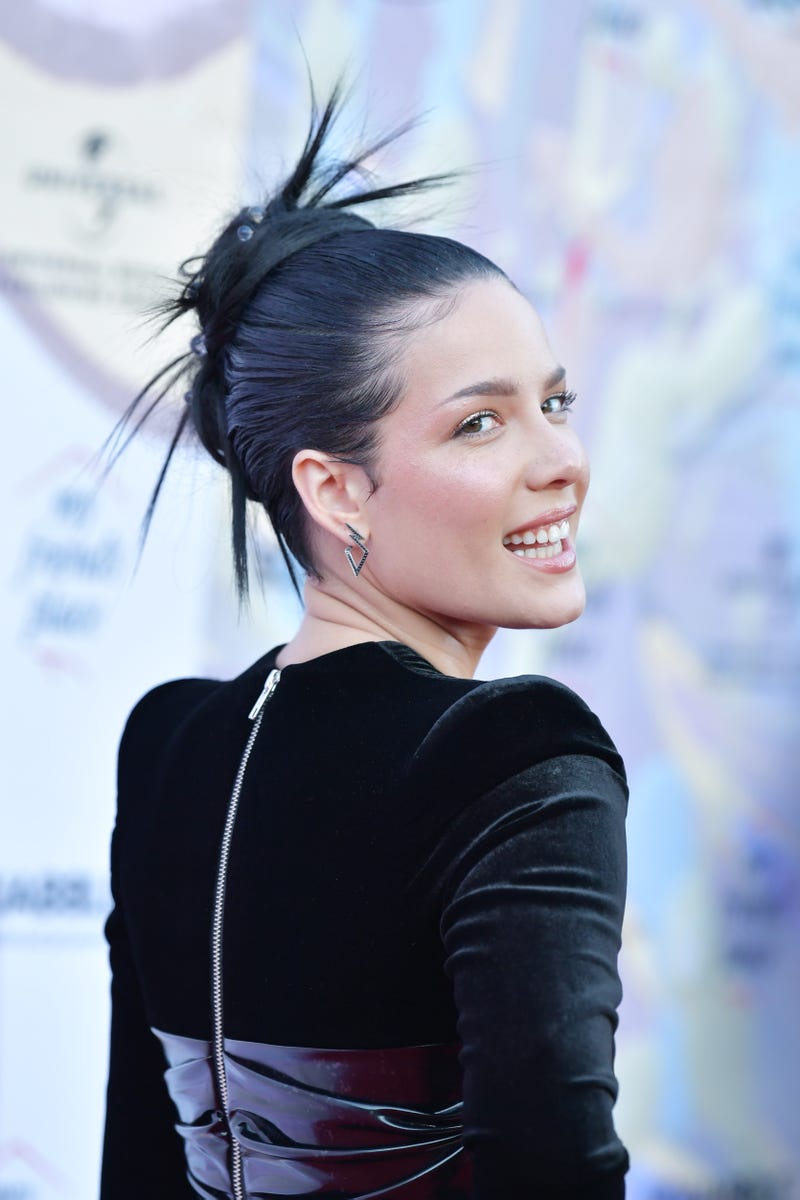 Business in the Front, Party in the Back

At a benefit to end youth homelessness in April 2019, Halsey pulled her hair back tight and let it all hang the back with a diametric, sculptural bun. 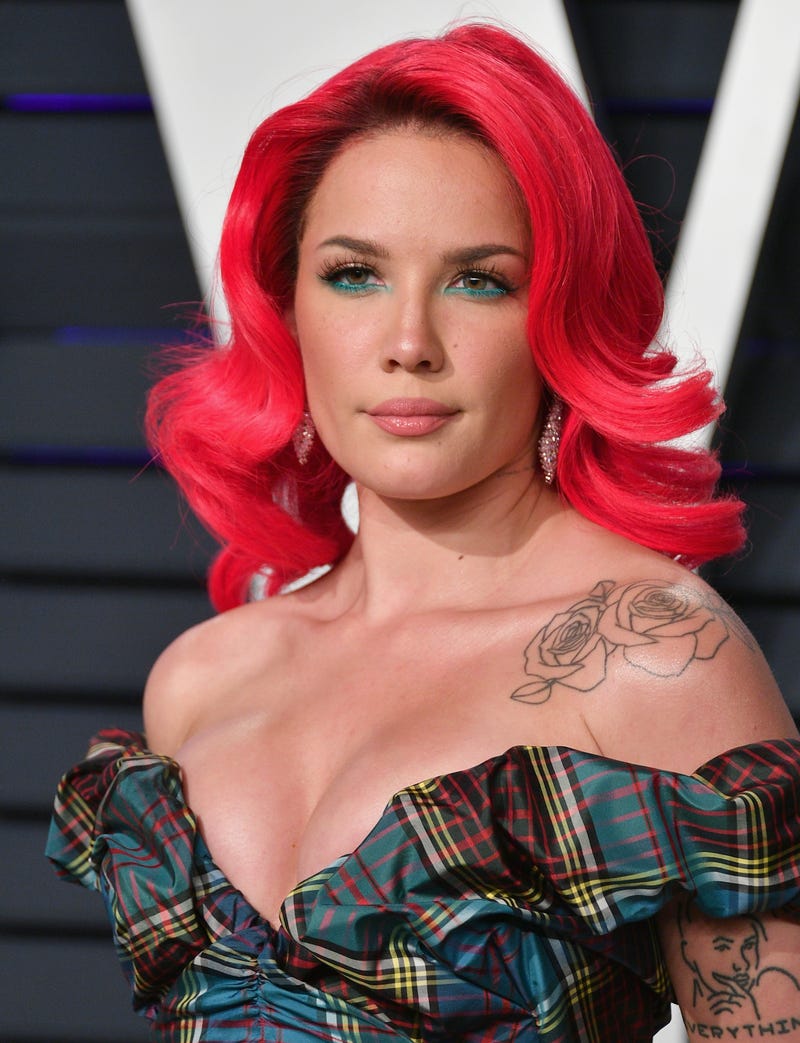 Halsey got about as close to red as deep pink gets at the 2019 Vanity Fair Oscar Party. 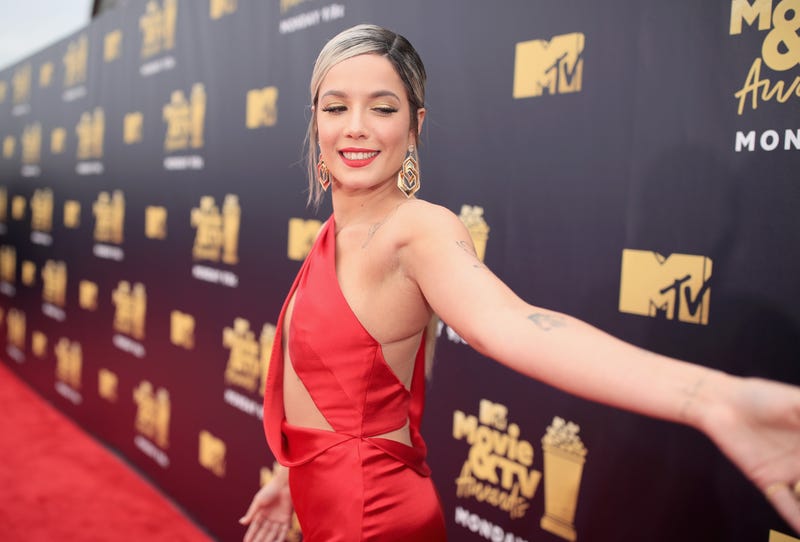 The New York-based singer was rocking a hairstyle that could best be described as the Black-and-White Cookie at the 2018 MTV Movies Awards. 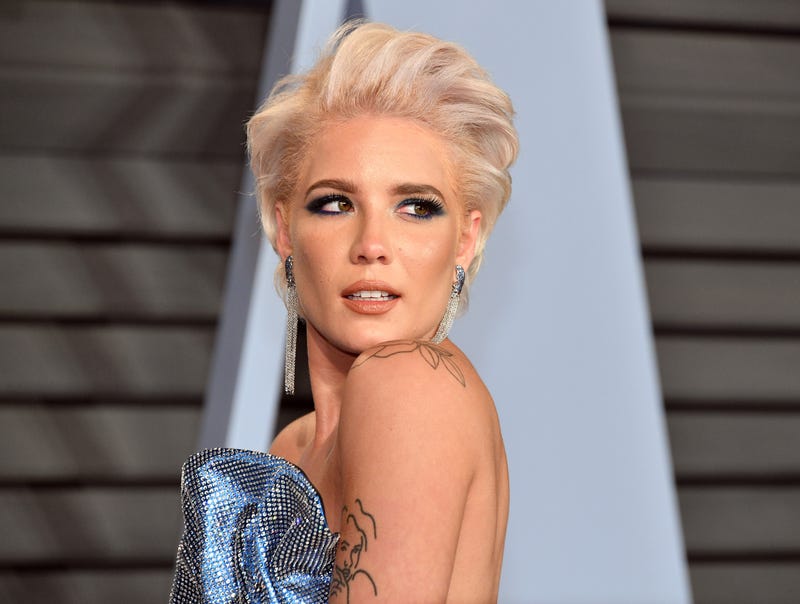 Where better for Halsey to get her Marilyn Monroe on than at the 2018 Vanity Fair Oscar Party? 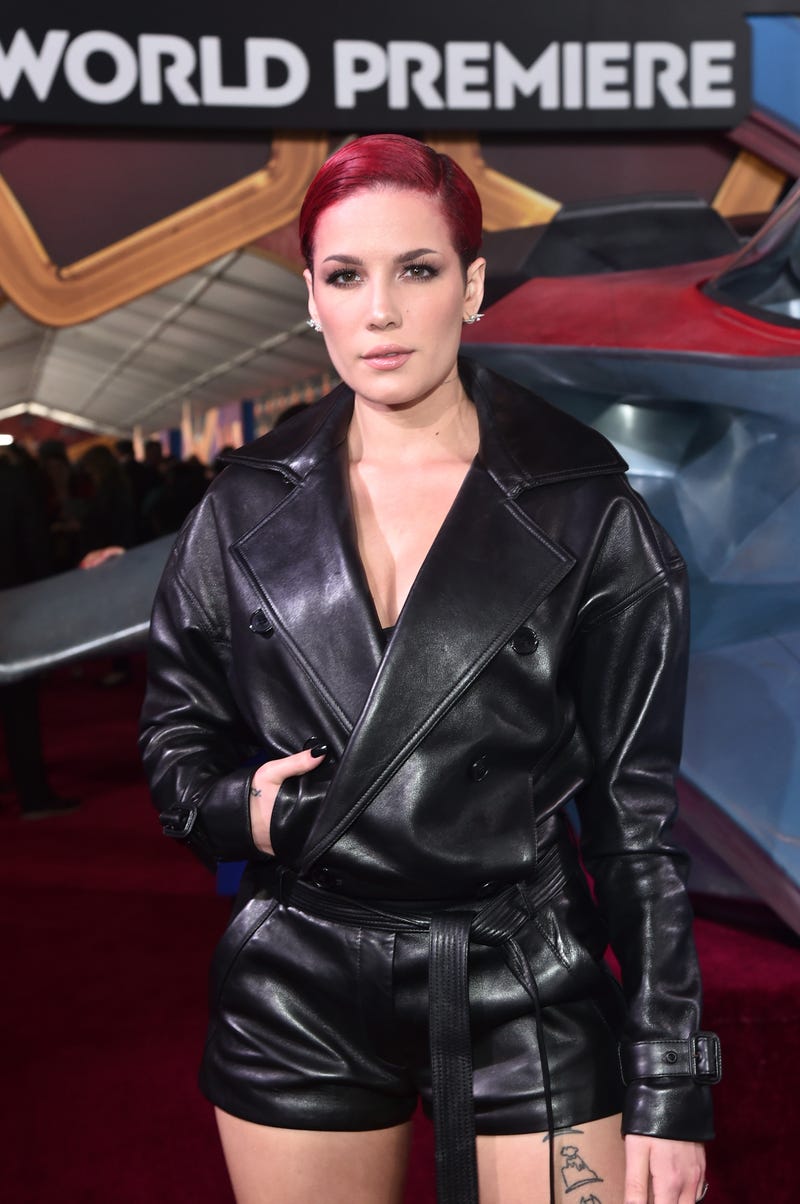 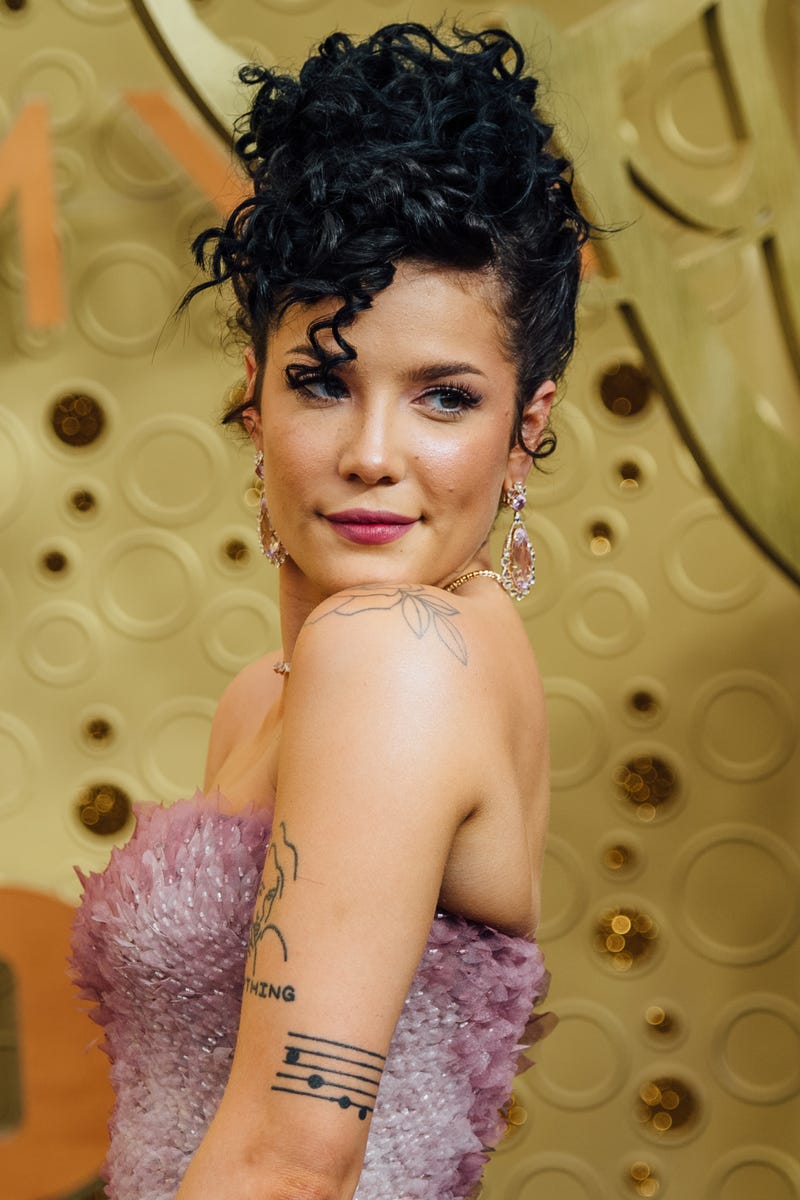 Too Hot for TV

Halsey wore this black curly pinned-up 'do reminiscent of classic Fran Drescher for this year's biggest night in television at the 2019 Emmy Awards in September 2019. 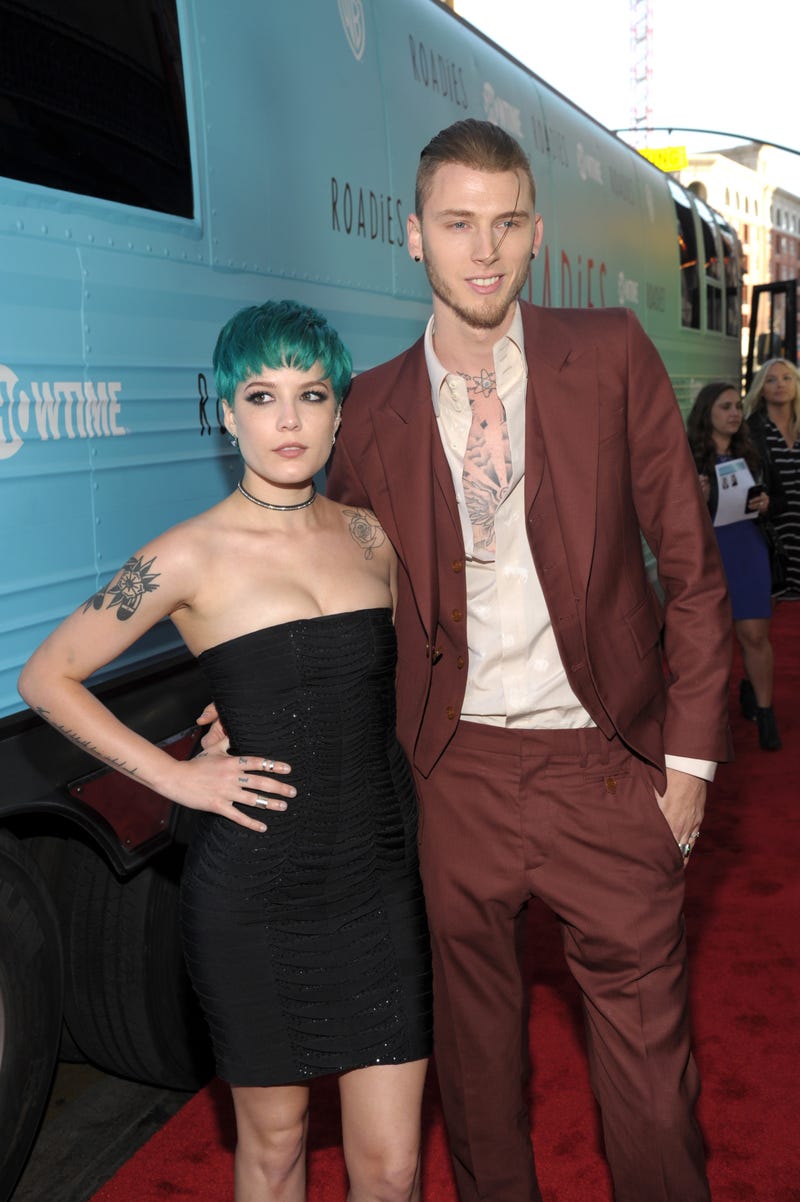 The super short and teal-green cut Halsey rocked at the premiere of Showtime's "Roadies" with Machine Gun Kelly is one of her most seapunk looks yet, a Halsey hair category with some very stiff competition. 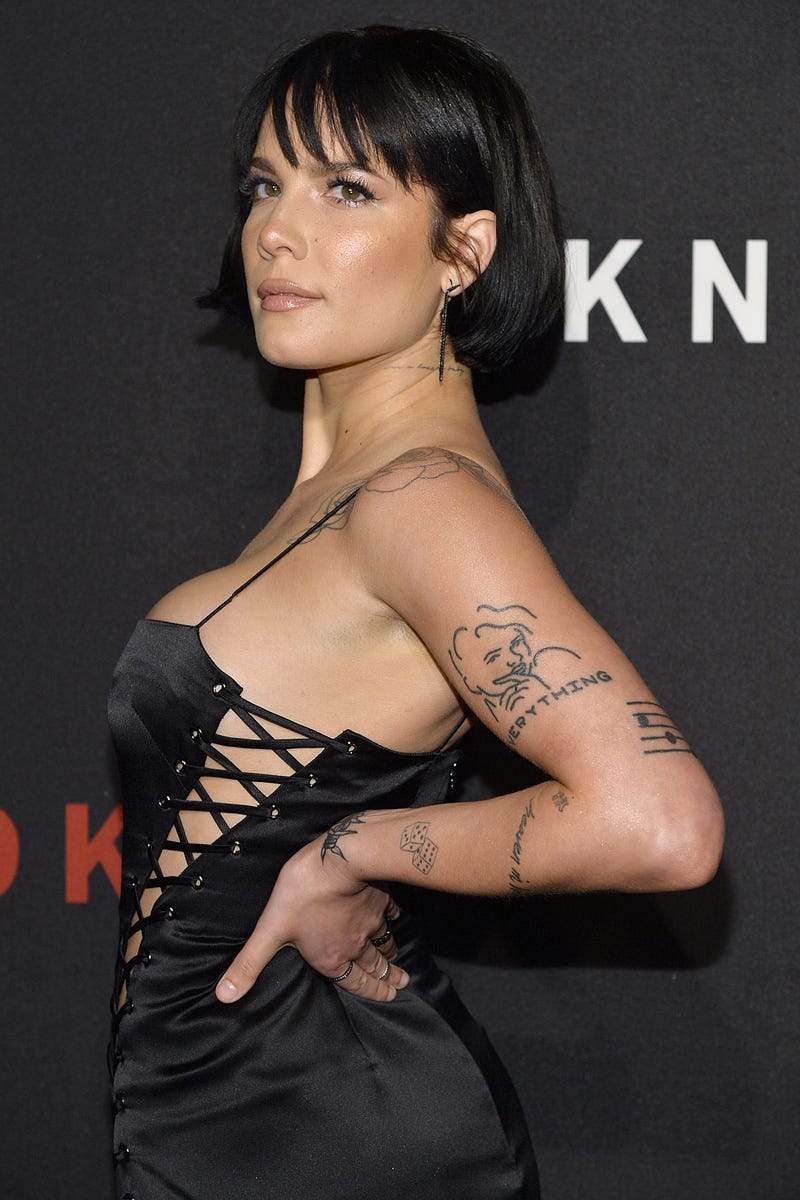 The bob she showed off at the DKNY 30th birthday celebration is easily one of Halsey's more conventional looks, which makes the elevated glam aura of her take on the timelessly trendy cut that much more impressive. 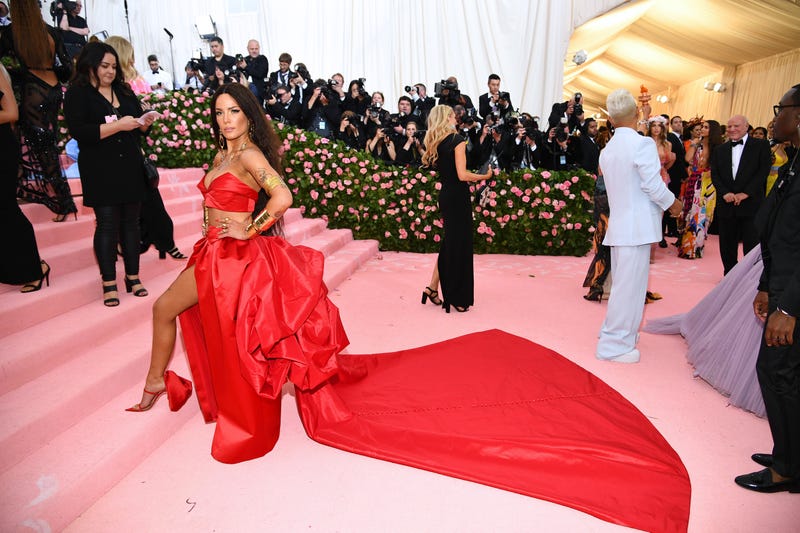 Although her fiery red gown did much of the talking at the 2019 Met Gala, Halsey still made a hair statement with her back-length crimped look.