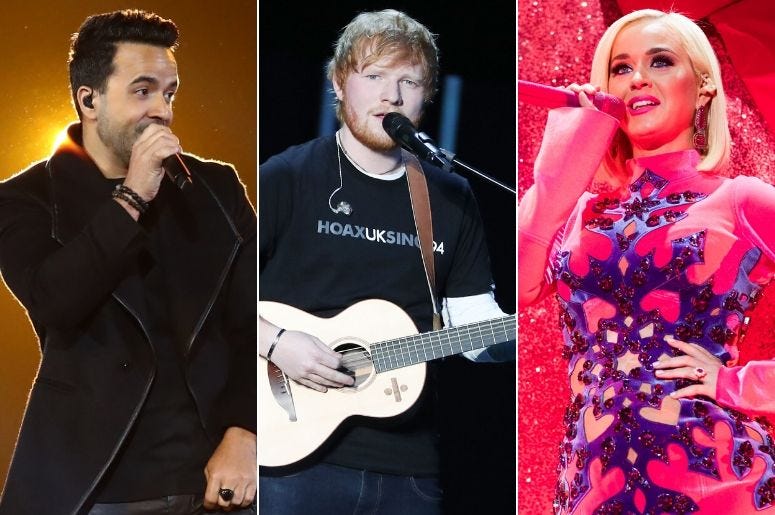 Sure MTV is great, but have kids heard of YouTube?

The 2010s were an amazing decade for music, and the first one to watch it entirely unfold on the video-sharing giant. We were just getting started in the aughts, and really hit hyper speed the past ten years. The first video with a billion views happened 8 years ago, and now there’s over 180 of them.

Countless clicks and endlessly updating view counts have led to a new metric of success, and we now know who will end the decade with the crown for the most watched music video on YouTube.

Sheeran is the only artist to appear twice in the top 10. The first with a romantic dance floor routine that's been repeated endlessly at weddings around the world.

An absolute anthem from one of the greatest songwriters of this generation. Ryan Tedder has his fingerprints all over some of the biggest songs of the decade, but saved this one for himself and his band.

You had us at Katy Perry swinging through the jungle. This 2013 jam has stood the test of time and keeps racking up the views.

Speaking of weddings, how about a surprise performance from Maroon 5? Sweet and hilarious, it's the 7th most watched music video in YouTube history.

We welcomed Bieber back with open arms in 2015. "Sorry" started a new era for Beliebers everywhere and we couldn't stop watching.

What a simpler time. PSY was the first to hit one billion views on YouTube, and the first to truly harness the power of a viral video. A "Challenge" before there were "challenges," we've all shouted "Oppa Gangnam Style" at least once in our lives.

Just smooth. A straight masterpiece. The song remains everywhere 5 years later and the video is a perfect companion.

The emotional loss of Paul Walker, the power of one of the world's biggest film franchises, and a vulnerable and personal song helped make this one of music's most unshakable songs and videos.

The gloved love story of Ed Sheeran has over 4.5 billion views, and still isn't in swinging distance of number one.

A global smash and the world's most watched video in the history of YouTube. It debuted just two weeks before Sheeran's "Shape Of You," and has outpaced him by an amazing 2 billion. There's nothing slow about "Despacito."