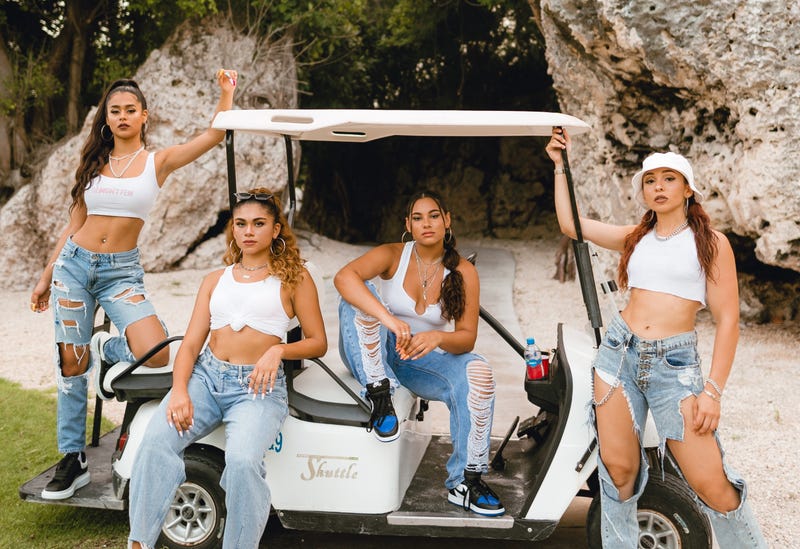 The up and coming girl group Bella Dose is here not just to inject a new sense of ardent “girl power” into the music industry, but also to pave the way as rising Latin, bilingual pop stars. In 2021 Bella Dose is reflecting on the journey they’ve been on thus far and looking forward to Suelta, a new EP that is sure to solidify the group’s distinctive voice.

With acts like Fifth Harmony and BLACKPINK calling attention to the popularity of girl groups again, it feels as if the cultural shift around modern-day girl groups is all about presenting a united front for women in music. While reflecting this image of unity, in turn, current girl groups often seem to be providing a gradual shift from the idea that female artists should be competing against one another.

Brianna Leah, Melany Rivera, Thais Rodriguez, and Jenni Hernandez all came together in 2018 after Bella Dose’s manager was auditioning talent across the U.S. to form the new girl group.

Having all been discovered in Miami, Brianna, Melany, Thais, and Jenni quickly started learning every aspect of the recording industry, taking on new instruments, and developing the skills to engineer their own recording sessions. Jenni explains that through the three years that Bella Dose has been coming up together she’s “had friends and stuff, but I never had sisters…. right off the bat meeting them it felt like I was meeting girls like me.”

Bella Dose, whose name refers to a “dose of beauty’” is no exception when it comes to being a coalition of “empowerment.” The group often focuses on the idea that all bodies are beautiful. Melany demands, “there is no ideal body type.” Having seen how girl groups were once “supposed” to look and peering back at beauty standards over the years, Bella Dose has concluded that they are here to directly break away from these molds. For Rivera and her groupmates, all representations of body types matter and should be celebrated.

With roots in Cuba, Honduras, Dominican Republic, Puerto Rico, Colombia, and Chile the group aims to infuse their own stories into their music while projecting a strong sense of self, oftentimes oscillating between Spanish and English in their lyrics. “The way we write too… we put confidence in our music,” shares Brianna. She adds, “when we write we want other people to feel confident as well…. it’s a way of inspiring our fans to love themselves.”

In 2020 Bella Dose released “Una Niña.” The track details a personal event in Jennifer’s life and allows the listener to further understand all the components that make Bella Dose who they are. While the group certainly delivers some hot and heavy bops, like “MUEVELO,” which makes for a perfectly sweaty night filled with dancing, “Una Niña” delves down beneath the surface and lays out the story of Jenni learning that her father passed away and chronicles her upbringing in the Dominican Republic.

Hernandez explains that she approached the group about writing and recording the song because she wanted to offer listeners a personal experience. “I feel like it’s good that I share my story as well, that way it can relate to people who have gone through the same thing… just to let them know that whatever happens, it’s okay, you can express yourselves, just know that you’re not alone,” says Jenni. The singer adds, “the song ‘Una Niña’ is actually based on a true story. We wrote it about a mother having to tell her daughter that her father had passed away, which was my mom when I was around six-years-old.”

Now in the new year, Bella Dose is bursting onto the scene with new music. Throughout the pandemic, the group has been working tirelessly to put together a fresh new EP.

On January 29, the girls released their brand new single “Suelta,” which will also serve as the title of their EP. Suelta arrives on February 12th.

The new track “embodies the reggaetón beat we came to love and enjoy in the early 2000s but sung by young, empowered women, with sultry lyrics that celebrate ladies letting their hair down, taking charge, and deciding how they’re enjoying their night out,” explains the group

While not being able to perform live in a year where the group has gained momentum, Bella Dose has poured themselves into their new music and feels ready to give the world music “that is all about being together.” The new EP will hone in on the sensation that a dance-infused evening brings about, a feeling we all sorely miss. Thais shares, “its about just having fun and being with your girls.”

The themes that Bella Dose takes on in their music, plus the spirit and attitude that they exude as a group makes us feel like there is a promising new angle for girl groups coming up in the industry right now. We look forward to continuing to getting to know the women of Bella Dose.