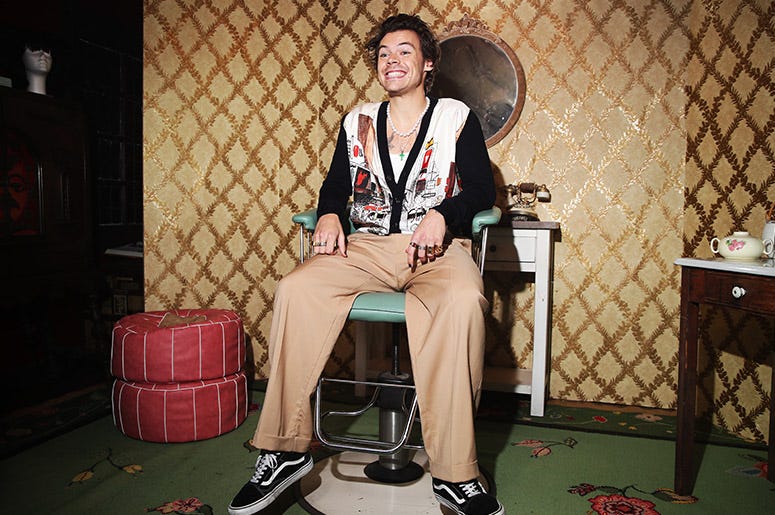 Harry Styles is now a front runner for the Clap Back of The Year award (not sure if it’s a trophy or certificate), after posting another androgynous inspiring image that challenges the #BringBackManlyMen movement.

Variety magazine recently did a feature on the One Direction star which included a classic Harry Styles photo shoot. The singer is looking off camera with a banana lazily hanging out his mouth, wearing a loose fitting, cool blue leisure suit with a blouse undershirt. He posted the cover photo to Instagram with the caption, “Bring back manly men.”

Apparently Styles got the message and responded accordingly.

Owens has already responded to Harry’s recent shade with a tweet of her own. “When people try to tell me I don’t have influence, and then @Harry_Styles dedicates an entire post to my tweet,” she wrote Wednesday, in a sad attempt at aggrandizement. “I inspire global conversation.”

When people try to tell me I don’t have influence, and then @Harry_Styles dedicates an entire post to my tweet.

In the same Variety piece, Styles views his gender bending wardrobe as a natural social progression. “To not wear [something] because it’s females’ clothing, you shut out a whole world of great clothes,” he tells the magazine. “It doesn’t have to be X or Y. Those lines are becoming more and more blurred.”

Styles continues to subtly steal headlines across the entertainment world. Comedian Nick Kroll appeared on The Tonight Show Monday and revealed how the singer was first to know about his recent engagement, after the two brainstormed ideas working on set for the upcoming drama Don't Worry Darling.

“Harry Styles was the first person to know we were getting married... and he gave us his blessing and it meant the world,” Kroll said. “He doesn't know this yet, but he is now going to be the guardian of all our children.”

music
The richest comedians in the world, ranked by net worth
sports
5 potential landing spots for Max Scherzer if Nationals sell
news
Whataburger fans find incredible painting of restaurant for sale
news
Burger King to bring fan-favorite item back to its menu
<a href="http://www.audacy.com/n