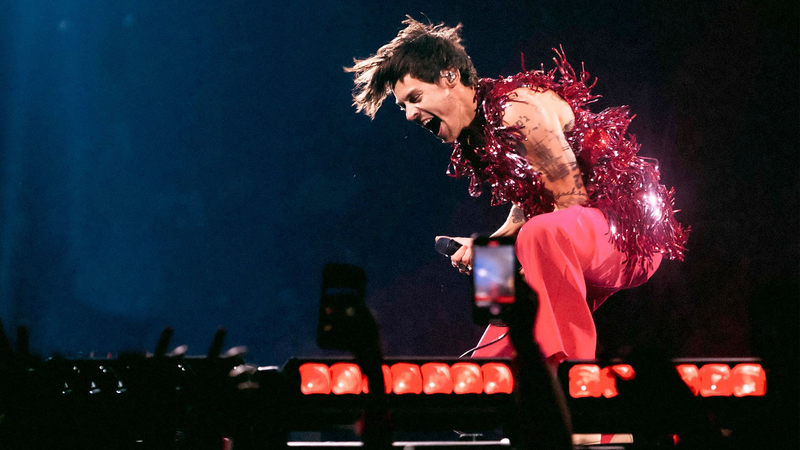 Harry Styles doesn’t just use his Love On Tour concert to entertain the masses with his angelic voice. Nope, he also uses them to help his fans make personal announcements, and then some.

With a Nashville show gender reveal already under his belt bell bottoms, and after reuniting exes in NYC. Harry helped one of his fans come out to her mom during his show in Milwaukee.

After spotting a fan (named McKinley McConnell) standing near the stage holding up a sign that read — “My mom is in Section 201. Help me come out.” Harry, of course being the LBGTQA+ ally that he is, put a brief pause to the singing to help make the heartwarming moment happen.

Holding the microphone out to McKinley at first, for her to make the announcement herself. However, she timidly requested for Styles to be the one to tell here mom, because there were “a lot of people” in the crowd.

Making his way across the stage, Styles of course obliged, singing to himself, before screaming — “Lisa, she’s gay!” After which the concert cameras panned to Mama McConnell, who at first appeared overwhelmed. However, began to compose herself, blowing kisses while wiping away tears as the crowd cheered on in support.

“Now, I don’t want to ruin a moment, but wouldn’t it be nice if you were a little bit closer together?” Styles joked, highlighting the physical distance between the fan and her mom at the concert.

Check out Harry being the ultimate concert host by helping a fan come out to her mom above, and as for the gender reveal and ex reunion we mentioned earlier, you can watch both below.