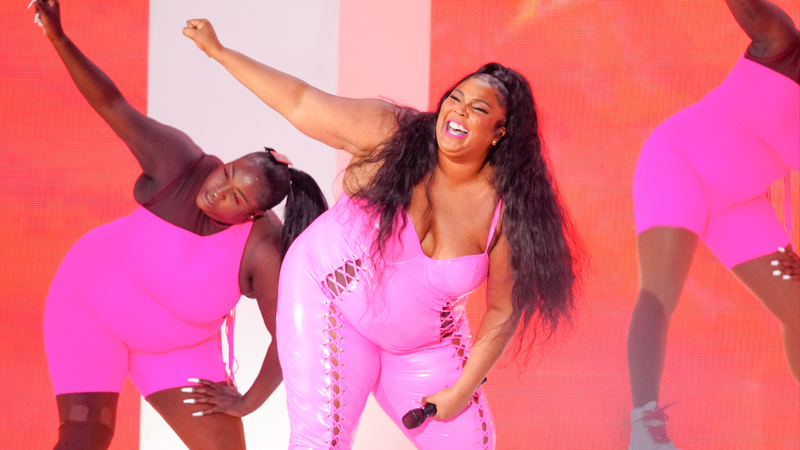 Hello and welcome to Lizzo’s “TED Twerk,” which, yes just as it sounds — is a TED talk on twerking.

Starting off, Lizzo discussed how she “used to think that only a**es like J.Lo's or Beyoncé's could be famous. I never thought that could happen to me.” And now her “famous” a** (which she also admitted was once upon a time was her least favorite body part) has become “the topic of conversations,” featured in magazines and the subject of a standing ovation from Rihanna.

“How did this happen?” she asked. The answer…“Twerkin’,” she replied, followed by a brief pause for a hair toss. She continued, “Through the movement of twerking, I realized that my ass is my greatest asset. Ladies and gentlemen, welcome to TED Twerk.”

As a true expert in her field, Lizzo went on to account that she first learned her “ass could do magic” when she encountered twerking at a teen club in Houston. While she at first wondered “How are they doing that?” It was thanks to her “Caribbean besties, Peaches and Jolene, and thanks to Master P… I found the rhythm.”

Since then, she’s done her research, discovering the origins of twerking and now eagerly wants everyone else to know as well. So, without further ado, we’ll let Lizzo explain:

“Modern-day twerking derived from Black people and Black culture. It has a direct parallel to West African dances like Mapouka. Traditionally, Mapouka was a dance for West African women to be used as a celebration of joy, religious worship, or a dance to do at a wedding to show that you were DTF or DTM — down to marry … Black people carried the origins of this dance through our DNA, through our blood, through our bones. We made twerking the global cultural phenomenon it became today.”

Getting down to it Lizzo’s goal is “to add to the classic etymology of this dance — because it matters. Black people will not be erased from the creation, the history, and the innovation of twerking.”

She continued,“Twerking is a Black American communal collaboration of Black Southern culture. From DJ Jubilee and Cash Money Records to New Orleans, to Lil Jon and the Ying Yang Twins in Atlanta, to Uncle Luke in Miami, twerking was alive and well in nearly every Black club in the South, but it would take years after these songs were released for twerking to finally become mainstream.”

Though in the early 00’s Beyoncé and her music video for her single “Crazy in Love” introduced the world to the “Uh-oh” dance. Making it seem okay to be yourself, because if Beyoncé could “shake a** and still be classy,” why couldn’t we all? In 2013, came Miley Cyrus and her 2013 VMA performance, and as Lizzo recalled, suddenly, critics were calling twerking “disturbing and disgusting.”

“Once mainstream, twerking was misunderstood and taken out of context. It was bittersweet. For one, I wish that a Black woman could have popularized twerking in the mainstream. But on the other end, twerking going mainstream played a role in the rise of my profile and my career.”

And  as Lizzo put it — since “everything that Black people create, from fashion to music to the way we talk, is co-opted and appropriated by pop culture… In this TED Talk, I’m not trying to gate-keep — but I’m definitely trying to let you know who built the damn gate.”

Now go ahead and press that play button on the video above and thank you for coming to Lizzo’s TED Twerk!