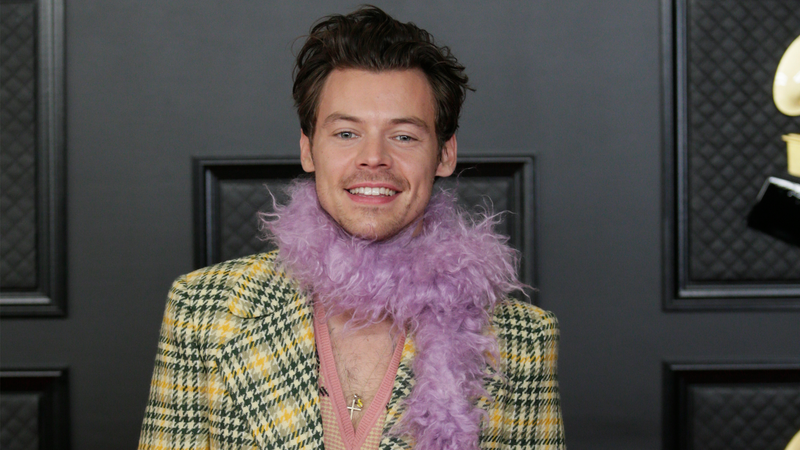 OMG you guys! Harry Styles has joined the Marvel Cinematic Universe. Sorry we’re gonna play coy for a bit about it but the news is just too exciting.

According to Variety journalist Matt Donnelly, who was at the premiere, the “Watermelon Sugar” singer has taken on the roll of Eros, the brother of Thanos.

Big reveal from #TheEternals premiere -- Harry Styles has joined the MCU as Eros, brother of Thanos.

As it seems, Harry makes his debut as the character in the Eternals post credits scene. And as a lucky few that got to see the final cut at the world premiere have since been claiming — those rumors (that have actually been swirling for a few months now) are indeed #facts.

Specifically — Twitter user @dpatt0, who when reviewing the movie, which he called a "rustic masterstroke from Chloe Zhao" (the director) gave a rather cheeky and pointed indication that Harry does in fact make an appearance. Saying, "That post-credit scene will give people a watermelon sugar high" followed by the watermelon emoji.

Giving us a bit of insight as to the crowds reaction to such a surprise, fellow Variety journalist Marc Malkin (also in attendance) reported the audience “squealed” at the sight of Harry in the film.

When Harry Styles shows up in the MCU. Audience squealed.

With that said, differing reports have been appearing online, with some noting that the preview screenings they saw had no post-credits scene. Interesting… We’re just gonna chose to ignore that.

While many Marvel superheroes are household names, like Captain America, Spiderman and Iron Man, undeniably many will be unfamiliar with Eros and his origins within the Marvel Comics.

So, who is Eros of Titan? Well, according to Marvel's official bio of the character  — “Eros grew up on Titan alongside his brother Thanos, embracing all the pleasures that life has to offer. He later becomes Starfox and an official member of the Avengers.”

His superpowers include super strength, flight and the psychic ability to control the emotions of others.

First introduced within the Marvel comic books in 1973, Eros has appeared as a member of the Eternals, the Avengers and the Dark Guardians within the comics. Sharing many storylines with characters such as Thanos, Gamorra, Nebula, Hela, Captain Marvel and She-Hulk.

Okay, WE’RE LITERALLY SCREAMING! With so many films and Disney+ series featuring these characters are in the works, the possibilities for Harry to pop in are endless! Okay, maybe not endless, but like there are A LOT.

According to Marvel, Eros is "an Eternal who loves life, adventure and romance, earning him the nickname Knave of Hearts.”

Despite the pretty much affirmed chatter, neither Marvel nor Harry have yet to confirm (or deny) whether Styles is starring in The Eternals and joining the MCU.