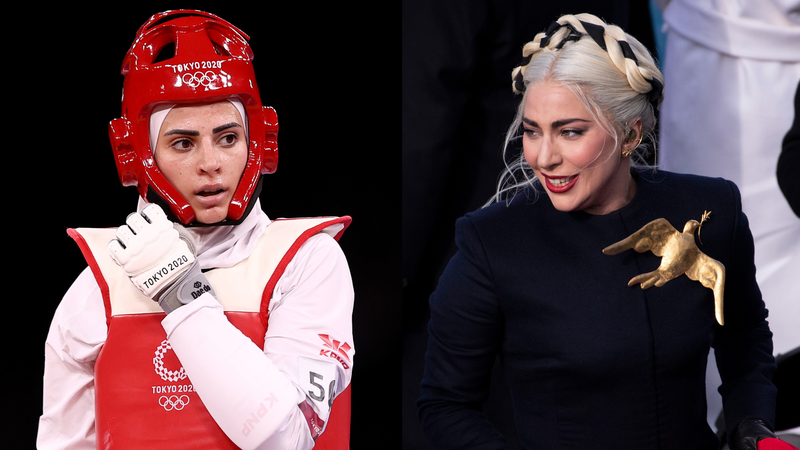 Lady Gaga is not only an global superstar and actress, but she's also an Olympic athlete... or is she? Sorry, it burst your bubble, but that's actually Julyana Al-Sadeq; allow us to explain.

Recently, some photos of Al-Sadeq, a Jordanian taekwondo fighter, sent fans on Twitter into a frenzy because she had an uncanny resemblance to the "Born This Way" singer. Fanpage, Gaga Daily tweeted, "Why is Lady Gaga at the Olympics?"

Singer, actress, activist and now Olympian! Lady Gaga really does do it all! 🎶🎬🙏🏻🏅 pic.twitter.com/Nt0Gn1j1Hg

Though Al-Sadeq was knocked out by Brazilian fighter Milean Titoneli in round 16, the Little Monsters still had a field day with the doppelgänger moment. Another fan tweeted, "There can be a hundred people at the olympics and one of them is Lady Gaga competing for a taekwondo medal."

Someone else hilariously imagined Gaga saying, "f*** grammys and oscars, i want a gold olympic medal now." Neither Gaga nor Al-Sadeq have responded to the commentary, but we're sure they got a good laugh out of the ordeal.

Why is Lady Gaga at the Olympics pic.twitter.com/DMvSOHCGyn

While you're investigating this mystery, press play on Audacy's exclusive station, ICONS, featuring tunes from the reigning Queens of Pop!