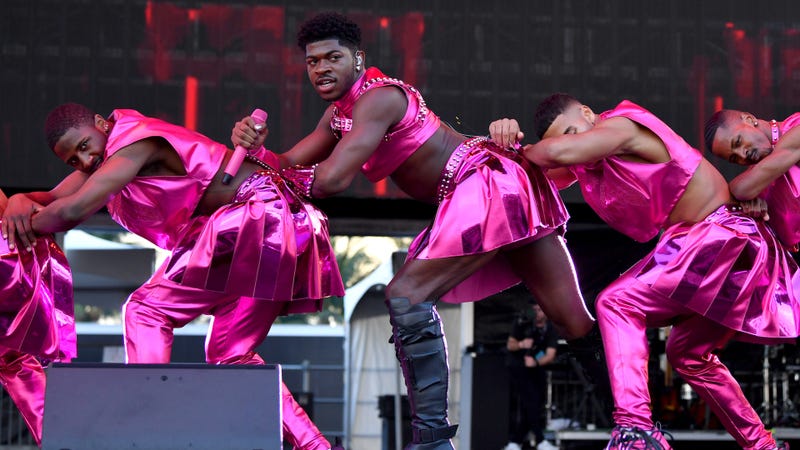 This past weekend both Lil Nas X’s performance and his hot pink mini skirt popped off at Audacy Beach Festival. In the moment, he endearingly urged the crowd “nobody better post that” before he continued his set. He’s now embracing his embarrassing wardrobe malfunction moment, and we love him even more for it.

We were there and respected Nas’ wishes by keeping the video proof to ourselves. However, now that he’s shared the moment on IG — let’s talk about it.

In the middle of his performance Nas had to do a little backwards jig to go offstage and fix his skirt that somehow unbuckled revealing his backside. But as he did, he fell backwards and knew right away it would end up on the internet. So as we’re sure Nas concluded — if you can’t beat them (or in this case prevent it from happening), join them.

In a post recapping his incredible weekend South Florida, Nas included a clip of the embarrassing moment, which he called out in the caption, “swipe to see me being the king of bussin my a** on stage.

Before Nas (quite literally) hit the stage, he sat down with Kevan Kenney to discuss being honored by Variety as this year's Innovator Award just the day before.

Talking all about the experience and his surprise at the beautiful words singer Chlöe Bailey shared while presenting him the award.

"Oh my God..." He said, adding the he "literally teared up" hearing Chlöe's words of encouragement at the Variety Hitmakers Brunch on Saturday. "It was the best speech I’ve ever heard about myself… I was literally in the audience like ‘um, wait a minute.' I thought she was gonna be like, 'ok Nas you're great, you have hit songs, come and get your award.' But she gave a thought-out, 'I care for you' speech.”

As for what’s next as far as new music goes. Following his debut release MONTERO, Nas told us that he has "absolutely no idea" what the sound of his next album will be, "besides the songs I've been working on, demos." But rest assured, he says he knows he is going to "find another part of me that I can pull out and give to people, because I already told my entire life story on my album. So it's like, 'what do I do now?' I have to live life and write about it.”

Check out our full interview with Lil Nas X below.