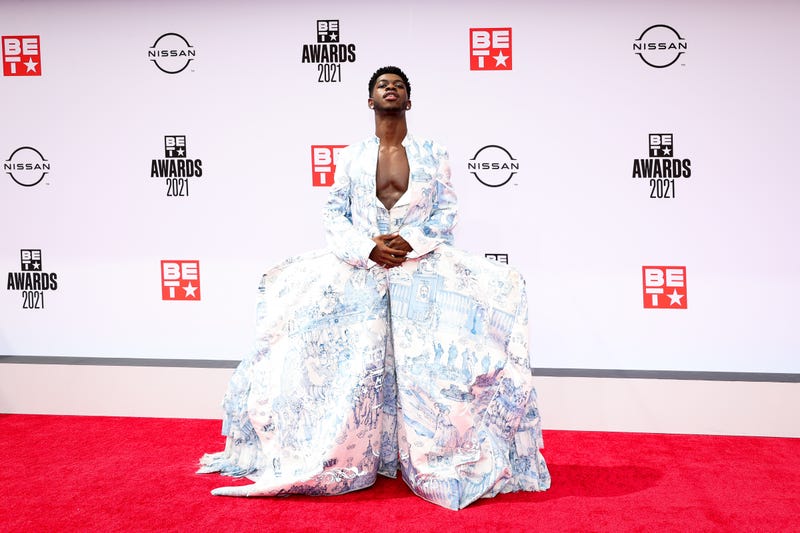 With the arrival of his debut studio album, just a little over two weeks away, Lil Nas X is dropping some juicy details about what we can expect from Montero.

Listen to your favorite music now on Audacy, and stay up to date on all the hottest Pop bops on the Pop New Arrivals exclusive station. Now playing on the Audacy app!

Throughout the year, LNX has debuted various singles that have had Twitter blowing up and kept fans on the edge of their seats, while also giving listeners insight into topics related to queer expression and identities. Ahead of the September 17th release, the “Industry Baby” artist dropped his full tracklist and divulged which artists have snagged features on the forthcoming project in a trippy, heavenly, visual video.

Revealing the album’s cover art as well, artists such as Elton John, Doja Cat, Megan Thee Stallion, and Miley Cyrus can all be heard on the deeply “personal” LNX project. With singles such as “Industry Baby” featuring Jack Harlow, “Montero (Call Me By Your Name),” and “Sun Goes Down” appearing on the 15-track record, the “Old Town Road” singer has said that this new collection of music delves deeper into his own history and is more “cohesive” than his 2019 EP, 7.

During a conversation with Variety, Elton John spoke highly of LNX, sharing, “Lil Nas X is a bold and brave provocateur who’s making amazing and inspiring music. He’s pushing the boundaries of urban music by wholeheartedly embracing his sexuality and visually projecting that celebration out into the world. Historically, there has been a lot of homophobia in the hip-hop world. DaBaby’s recent damaging comments about the LGBTQ community and people living with HIV/AIDS clearly demonstrate that there is still so much education and work to be done.”

brooo the support all of my album content has been getting is next level. i am so thankful! i really want to make you guys happy and invite you to my world. #MONTERO 🦋💕

LNX, also told Variety that he has emerged out of the pandemic as “a totally different person,” empowered by his sexual identity, using his music to convey his newfound outspoken nature and embrace tracks with unapologetic LGBTQ+-focused visuals and topics.

Check out the full Montero tracklist: